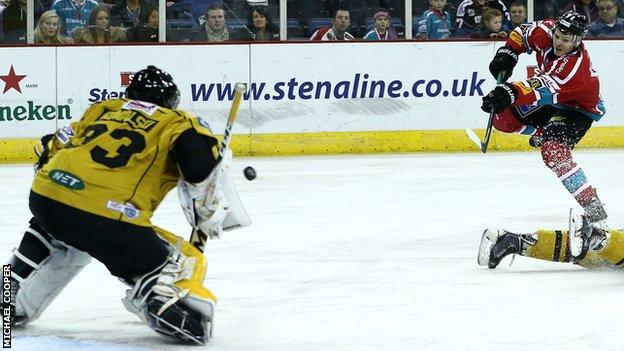 Belfast Giants will take a 5-2 lead into Tuesday's Challenge Cup Final second leg after having the better of the first leg at the Odyssey Arena.

Two goals from Craig Peacock and a Jeffrey Szwez strike put the Elite League champions 3-0 up but Nottingham competed well for the rest of the game.

But Jonathan Weaver hit the night's last goal to give Nottingham hope.

The final period was goal-less as Nottingham appeared content to limit the damage ahead of Tuesday's return match.

Before the second leg, the two teams will meet again on Saturday evening in another Elite League contest at the Odyssey Arena.

Peacock's two goals came in the opening period with his second a powerplay effort just before the interval.

With the Elite League title and their Conference trophy already in the bag, Belfast will be favourites to win a third trophy of the season on Tuesday night.

Paul Adey's side will also chase play-offs success at the conclusion of the season.