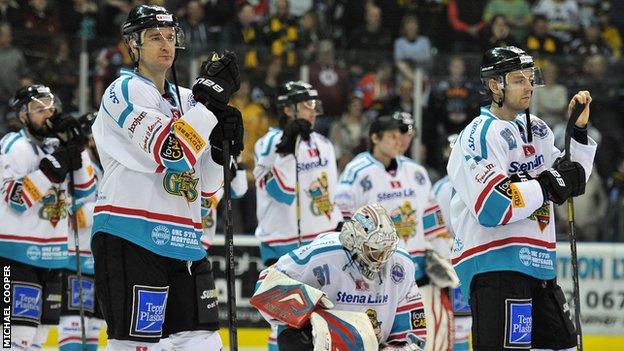 Belfast Giants's hopes of earning a Grand Slam of trophies this season were ended as holders Nottingham Panthers clinched a dramatic penalty shootout victory to retain the Challenge Cup.

Nottingham forced a shootout by reeling in Belfast's three-goal first-leg advantage with a 4-1 victory.

After winning the first leg 5-2 on Friday, the Giants went into Tuesday's game in Nottingham as strong favourites to lift another trophy.

But the Elite League champions seemed unable to match their hosts' intensity throughout the game.

Lynn Loyns gave the Panthers early momentum with a fifth-minute strike after a rebound caught Belfast netminder Stephen Murphy out of position.

Kalus doubled Nottingham's advantage on the night in the 16th minute, cutting Belfast's aggregate lead to one.

The Giants looked to have regained control six minutes into the second period as Chris Higgins set up Jeff Mason to momentarily silence the vocal home crowd.

However, Nottingham reduced Belfast's lead to only one goal again in the 36th minute as Eric Werner tapped in as the Giants claimed Murphy had been impeded.

With just over 12 minutes of normal time left, Nottingham levelled on aggregate as Matt Ryan lashed in a long-range effort after he had been given too much space.

Murphy had to make a couple of fine saves to prevent Nottingham clinching victory in normal time, and the Giants hung on to force the shootout despite a controversial penalty call on Robby Sandrock in overtime.