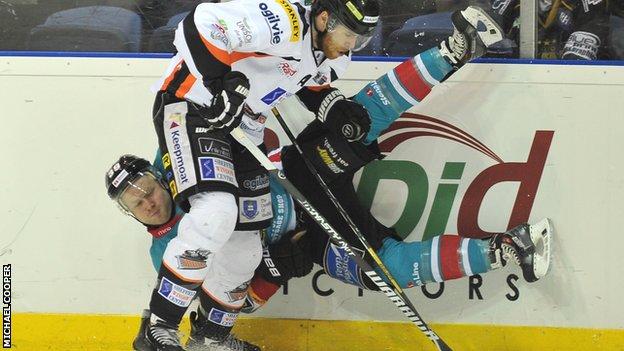 Belfast Giants ended the season with a 3-2 overtime defeat by Sheffield Steelers in the Elite League play-off final in Nottingham on Sunday.

Robert Dowd equalised for Sheffield in the 18th minute of the second period.

The game went to overtime and Drew Fata's snap-shot two minutes into the extra period won it for the Steelers.

It was a disappointing end to the season for the Giants, who clinched the Elite League title in February before losing to Nottingham Panthers in the Challenge Cup final a fortnight ago.

Brookwell's deflected shot on a powerplay gave Belfast the lead but Hill equalised three minutes later with a tap-in.

Shields made it 2-1 after 30 minutes, only for Dowd to level it up again.

Giants netminder Stephen Murphy and his opposite number Frank Doyle both made superb saves in the third quarter before Fata's sudden-death winner.

"I don't think we got what we deserved in the game," said Giants coach Paul Adey.

"The toughest one to win is the league championship and we can be very proud of that and to come so close, missing out in a shoot-out and now in overtime, is tough but it's been a great season."

The Giants progressed to the decider after beating Fife Flyers 1-0 in Saturday's semi-finals.