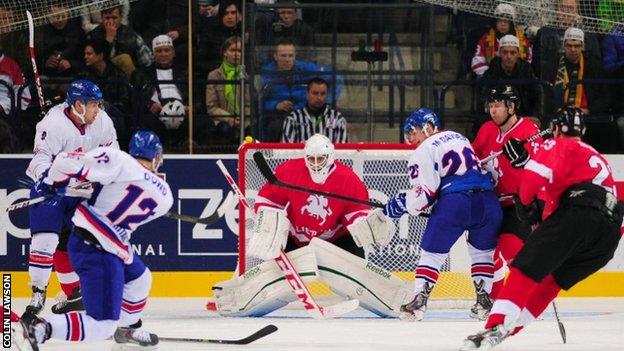 Great Britain's hopes of World Championship promotion were ended by a 2-1 defeat to Lithuania.

Despite outshooting the hosts 23-15 in Vilnius, GB went behind when NHL star Dainius Zubrus, of the New Jersey Devils, set up Arnoldas Bosas.

GB equalised through Robert Dowd as he skated out from behind and fired past Mantas Armalis, but Zubrus sealed victory with the decisive goal.

It means GB cannot be promoted back to Division 1A.

"Lithuania are a great side and they were very good tonight," said GB head coach Doug Christiansen, whose side lost 4-0 to Croatia in their opening game but beat Romania 4-1 on Monday.

"I am disappointed to lose and we have to pick ourselves up for our next match against Netherlands."

His opposite number, Bernd Haake, thought Zubrus was the difference, describing the 35-year-old forward's performance as "immense".

GB have two games remaining in their campaign, against Netherlands on Thursday and Poland on Saturday.