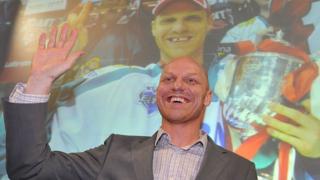 Thornton is enjoying his third spell with the Giants, having enjoyed previous stints as a player and a coach.

Appointed by former General Manager Todd Kelman, before his departure to head up a consortium to take over the Cardiff Devils, Canadian Thornton says the Giants have "unfinished business" and an "increased hunger" after narrowly losing last season's Challenge Cup and play-off finals.

Watch: UK Championship - Usenbacher in control against O'Sullivan, Selby ahead