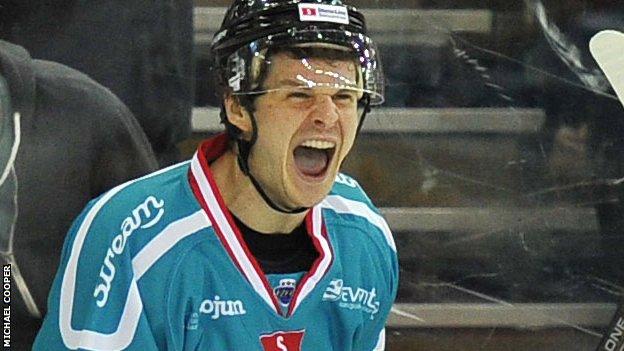 Reigning Elite League champions Belfast Giants made it three wins from three with an on the road victory over Hull Stingrays on Saturday night.

Hull took an early lead with a powerplay score by their Canadian forward Eric Galbraith.

Belfast hit back quickly to edge ahead thanks to powerplay goals from Craig Peacock and Colin Shields.

In the third period Ray Sawada extended the lead with Carl Lauzon getting one back for a shorthanded Hull.

The Giants lie second in the league standings, two points behind Coventry Blaze who have won four out of four.

The narrow defeat leaves Hull with just one win in five games.

The Stingrays made a bright start with Galbraith scoring past netminder Stephen Murphy after Giants captain Adam Keefe had been penalised for slashing.

The visitors pulled level at 7:30 through Peacock and then Shields scored on 11.56 to put the Giants 2-1 up.

There were no goals in the second period despite the Giants having 19 shots on home netminder David Brown.

Evan Cheverie and Calvin Elfring combined to set up the impressive Sawada who put the Giants 3-1 up.

They needed that score in the end as Lauzon scored to make that made it a nervous last few minutes for the Giants.

On Sunday, the Giants travel to Sheffield for their first clash of the season with the Steelers.