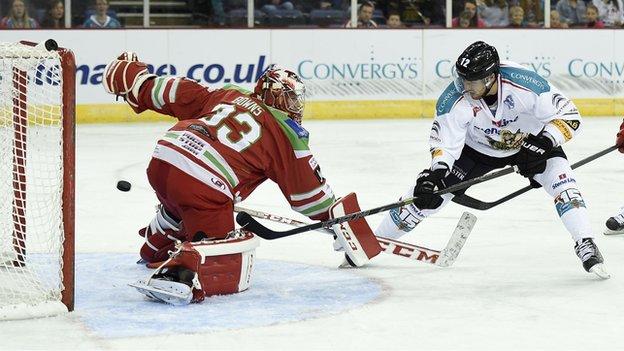 Belfast Giants defeated Cardiff Devils for the second time in two days thanks to a 5-2 win on Saturday night.

Ray Sawada gave the hosts a first-period lead at the Odyssey but the Welsh visitors hit back with goals from Mark Richardson and Tyson Marsh.

Lloyd added the fourth and Cody Brookwell completed the scoring as the champions remained top of the table.

Sawada scored after seven minutes but the Devils went up several gears early in the second period and they scored twice in the space of 36 frantic seconds.

The Giants responded with a well taken equaliser by Lloyd and they re-established their lead when a wonderful pass from Sawada across the face of the Cardiff goal was met first-time by Kompon, who flashed the puck past Bowns and into the net.

The Devils put increasing pressure on Belfast in the third period but a sucker punch came as Lloyd scored, with the home-side shorthanded, to ease the Odyssey crowd's nerves.

An empty-netter from Brookwell with 12 seconds remaining was cruel on the plucky Cardiff side, who were beaten 3-2 by the Giants on Friday night.