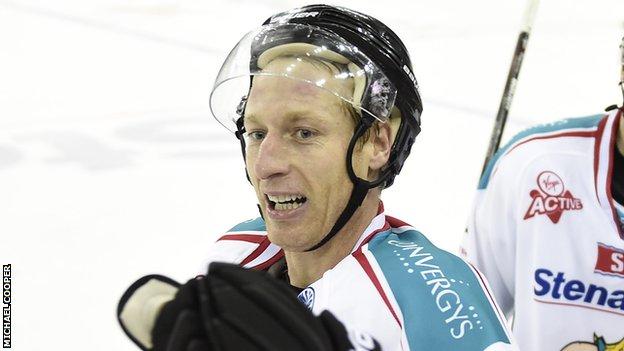 The Belfast Giants have made the semi-final groups of the Continental Cup despite a 4-2 defeat by Fischtown.

Steve Thornton's men had won the first two of their three games which proved enough for a place in the last eight.

They will play in France on 21-23 November against hosts Angers, Polish club Sanok and Neman Grodno of Belarus.

Giants man of the match Mike Kompon scored both goals for the visitors on Sunday against Fischtown who sealed their victory with two late goals.

The Giants went into Sunday's final game knowing that a win or a loss by less than seven goals would ensure passage to the semi-final stage for the first time since 2003.

Marian Dejdar gave the German club an early lead in Bremerhaven but Belfast equalised when Kompon touched in Robby Sandrock's shot with just over five minutes to go in the first period.

Kompon got his second with an unassisted score on 21:52 to edge the Giants into a 2-1 lead.

Belfast then survived a five-on-three powerplay when Kevin Phillips and Adam Keefe were penalised.

However, soon after getting both men back, they conceded Jan Kopecky squaring the contest at 2-2 on 38:50.

That is how it stood until the German side scored with just over two minutes to go, pouncing on the powerplay through Brook Hooten after Ray Sawada had been binned.

With netminder Stephen Murphy pulled, Kopecky scored into an empty net for Fischtown's fourth with just one second left on the clock.