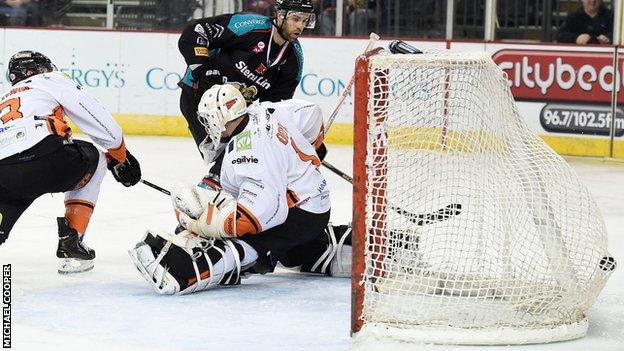 The Belfast Giants beat Sheffield to climb to third place and are now just one point behind the new Elite League leaders, the Braehead Clan.

The Steelers had gone into Friday's clash at the top of the table but they slip to second after this Odyssey loss.

Evan Cheverie, Cody Brookwell, Calvin Elfring, Robby Sandrock and Craig Peacock scored as the Giants battled back from being 2-0 down.

The sides meet again in another league showdown at the same venue on Saturday.

That promises to be a tasty rematch as rivalries are renewed in a game with lots at stake.

In Friday's match, Sheffield took advantage of an early powerplay to score through Dustin Kohn.

Moments later on the powerplay the Giants got a chance to halve the deficit but Peacock's penalty effort was easily saved by Frank Doyle.

The Giants dominated the second period and got a goal back on the powerplay through Cheverie who found the far corner of Doyle's net.

Just before the end of the second period, Kevin Westgarth and Peacock did well to win the puck behind the Steelers net and when it came loose defenceman Brookwell netted a slap shot to level the game at 2-2.

In the third period, the Giants went 4-2 ahead through powerplay goals by Elfring and Sandrock.

Ben O'Connor pulled one back to revive Sheffield hopes but Peacock scored an empty-netter in the closing seconds.