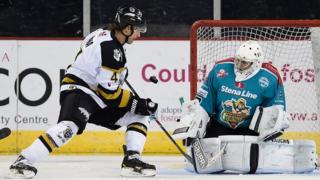 Face Off - Giants on song with Chubak

The Belfast Giants halted a four-game losing streak last weekend with Elite League wins over Sheffield Steelers and Edinburgh Capitals that moved Steve Thornton's side back into second place in the standings, five points behind Braehead Clan.

Netminder Carsen Chubak was the man of the match in Sheffield as he made 38 saves as the game ended scoreless and then stopped two Steelers penalties as the Giants took the points in the shootout.

Chubak has become a fan favourite since replacing the injured Stephen Murphy and now has his own anthem, sung every week by Giants supporters.

To the tune of Take That hit "I Want You Back For Good" Giants fans chant "I Want CHUBAK For Good."

'Special night' as Arsenal win in front of fans