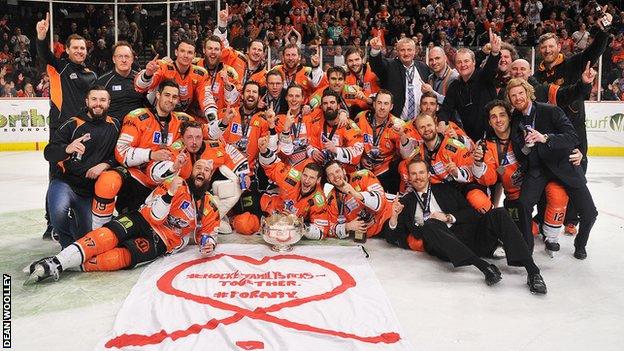 Sheffield Steelers beat Cardiff Devils 2-1 in their final game of the season to win the Elite Ice Hockey League.

It is the fourth time in the last 11 years that the Steelers, beaten by the Devils in the Challenge Cup final two weeks ago, have been crowned champions.

Carl Hudson's powerful shot midway through the first period put the Devils ahead, before Robert Dowd equalised for the hosts in the second period.

But Jeff Legue struck the winner five minutes into the final period.

Victory for the Steelers confirms their spot in the Champions Hockey League, while the Devils and Braehead Clan will vie for the second qualifying position for the 2015-16 tournament.

The result also means that Nottingham Panthers are confirmed as Erhardt Conference champions.

Cardiff drop to third place in the Elite League standings, one point behind Braehead Clan, who beat Hull Stingrays 9-4 on Saturday.

The Devils play their final game of the regular season at home to Nottingham on Sunday, while Braehead travel to Fife.

The Welsh side will then face Belfast Giants over two legs in the quarter-finals of the end-of-season playoffs, with the winner going through to the finals in Nottingham on 4-5 April.