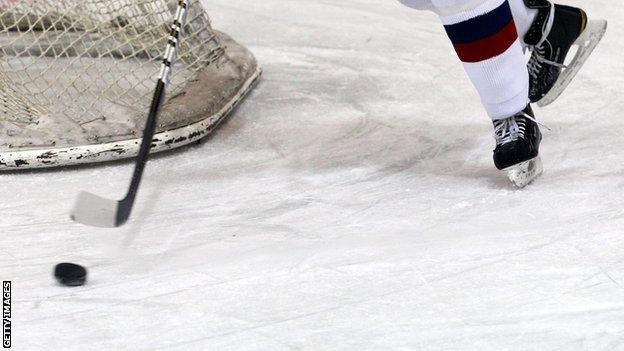 Edinburgh Capitals' four-goal hero Ryan Hayes believes the key to their impressive 6-2 win over Cardiff Devils on Saturday was simplicity.

The American forward made it eight goals in five games, taking his tally to the season to 15 goals in 17 games as the Elite League's top scorer.

Hayes suggested he got the lucky with four goals in one night.

"Getting the win was fantastic and all we did was we kept our game simple," said Hayes.

"I think that's the key when playing against the top end teams and we try to wear them down.

"It was an awesome night on Saturday. Pucks just seemed to bounce my way and I've haven't scored four in one game since I was a kid so it was a special night."

Hayes' virtuoso display was arguably the highlight of the weekend for the Scottish teams as the Caps stunned the Devils with that magnificent scoreline.

"All I can do is keep shooting and that's all I've been doing. Plus playing with guys like Craig McCallum and Taylor Dickin have given us some goals this year.

"The coach brought in everyone for a reason and I hope he looked to me to bring the goals in when I arrived. Hopefully we can continue on that vein.

"We've shown we're a good team so we shouldn't be as much of a surprise to the other teams in the league now."

Andrew Hotham cancelled out Trevor Gerling's first period opener, before Hayes struck his first two to put the Capitals 3-1 up.

Joey Martin pulled one back, but the home side surged further ahead as Paul Zanette made it 4-2 with Hayes tying the game up with another two strikes.

Danny Stewart of Fife Flyers had one of his better weeks as he celebrated the birth of his baby daughter and became the import with the most appearances in the Elite League.

His 563rd outing in his league came at Manchester Storm when the Flyers snapped a six game losing run to beat the league's new boys 4-3, with Stewart opening the scoring.

Ryan Dingle added to the score before Patrik Valcak pulled one back for the home side. Then Kyle Haines and Shayne Stockton scored one apiece to give Flyers a three goal lead.

Storm fought back though, with David Phillips and Matt Davies bringing the score to within one, however Fife held out to claim a priceless victory.

Flyers returned home to face Braehead Clan on Sunday and left it late as two goals in the dying embers of the third period clinched them a 2-0 win.

Dingle opened the scoring with eight minutes to go before Shayne Stockton fired in an empty net goal to seal the bragging rights for the Kirkcaldy side, who made it a four point weekend.

Dundee Stars suffered a disaster on Saturday as they were crushed 7-1 at Nottingham Panthers in a night to forget for Marc Lefebvre's side.

Juraj Kolnik and Bryan Schmidt fired the Panthers in front before Mikael Lidhammar pulled one back in the opening seconds of the middle period for the Stars.

However, Nottingham surged to victory courtesy of goals from David Ling, Brad Moran, Andy Bohmbach, Stevie Lee and a second for Kolnik to bookend the result.

The Tayside men hosted Belfast Giants on Sunday and ended their weekend beaten after throwing away a 4-1 lead to lose 5-4 in overtime.

Curtis Leinweber opened the scoring, with Mike Forney levelling on the powerplay for Giants not long after only for Riley Wetmore to restore Stars' lead.

Two quickfire goals from Justin Faryna and Lou Dickenson in the second seemed to give Stars an unassailable lead, but James Desmarais pulled one back for Belfast.

Derrick Walser and a second from Forney tied at 4-4 until Craig Peacock popped up with the winner in the extra period to take both points for the Giants, leaving Dundee heartbroken.