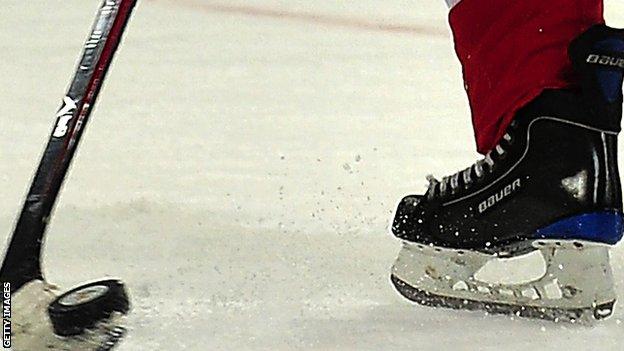 But he remained immensely proud that his team were in Nottingham to compete in the 2015-16 season-ending finals.

After Sunday's 6-0 loss to Cardiff Devils in the third-place game, Dutiaume said it was "difficult" to lift his men from their semi-final.

Flyers went down 4-1 to Nottingham Panthers in Saturday's last-four tie.

"I don't know how that third-place game is for fans, but it's certainly painful for fans and difficult to get up for," said the Fife head coach.

"This is our second third-place game to play in and I spoke with the players about playing professionally.

"Unless you come in 100% and fully switched on, it's difficult to catch up with the pace and you could tell Cardiff were more tuned in.

"It leaves a sour taste in the mouth to go out on a 6-0 defeat, especially after playing such great hockey.

"The bigger picture is what this team has accomplished and I couldn't be prouder of what the guys done this year."

If the quarter-final win over Braehead Clan was the Flyers' high point, Saturday's defeat by Nottingham must have been at the other end of the scale.

In the first period, Fife were as dogged and determined as they had been over Ryan Finnerty's men, with David Brown in goal impressing once again.

After Coventry's shock 6-2 thrashing of Cardiff earlier in the day, the Flyers sought to record another upset.

But the Panthers were clinical and two quick goals during the second period rendered Fife's efforts in vain.

David Clarke's well-struck shot into the roof of Brown's net got the valuable opener, followed by Logan MacMillan sweeping in a second from Andy Bohmbach's square pass.

Patrick Cullen wasted an open goal opportunity that could have made a difference, but Ryan Dingle's angled finish started to get the Flyers fans believing again.

They thought they had scored an equaliser through Michael Dorr, but it was ruled out for an earlier infringement.

Panthers scored straight away through Brad Moran before Evan Mosey added their fourth to seal a place in the final.

For the Kirkcaldy side, their chance at redemption was the third-place game against Cardiff.

The Welsh team took the lead during the first period when Luke Piggott finished off a well-worked move.

Ryan Russell skated in from the left to flick the puck into the roof of the net to double the lead.

Then Chris Jones scored with a rebound to make it 3-0 with four minutes left to go of the first period.

David Brown was given an early finish and replaced by Craig Douglas as Dutiaume decided to utilise his team.

Cardiff went four up in the second as Jake Morrissette finished with a close-range tip then Piggott made it 5-0 shortly after.

Kyle Haines nearly gave the healthy travelling support something to cheer about late on with a strong effort that was batted away by netminder Mike Will.

Jones added his second and Cardiff's sixth to complete the rout on what turned into a miserable weekend for the Flyers in Nottingham.

The Scottish side's weekend was rounded off with the news of associate coach Danny Stewart's retirement.

Fans paid tribute to him during the final between Nottingham and Coventry, singing his name during the 39th minute - his shirt number.

Stewart revealed the physical rigours of the sport were starting to affect his everyday life and admits he took his time to make the decision.

He said: "I've had a great run and met a lot of great people along the way, but it was never an easy decision and I've been mulling it over since Christmas.

"My body has shown more wear and tear this year than ever before and I've been feeling more and more discomfort as the days and months went on so it's the right time to retire."

And Stewart's old club, Coventry, ended the weekend with a 2-0 loss to Nottingham, who clinched the final trophy of the season.

Stephen Schultz and former Dundee Stars defenceman Kevin Quick notched the goals to clinch the trophy for the home side.