The Washington Capitals won the Stanley Cup for the first time in their 44-year history by beating the Vegas Golden Knights 4-3 in game five.

No Washington team had won a major title in any sport since American football side the Washington Redskins won the Super Bowl in 1992.

"It means everything, you couldn't write the story better," said Lars Eller, who scored the winning goal.

After a tight first period, five goals were scored in the second as Jakub Vrana opened the scoring for the Capitals.

Nate Schmidt equalised for the Golden Knights before the Capitals' captain Alex Ovechkin restored parity for his side.

But it was the Golden Knights who led at the end of the period courtesy of goals from David Perron and Reilly Smith.

However, the hosts could not hold on to their lead with Devante Smith-Pelly equalising - before Eller scored what proved to be the championship-deciding goal.

Ovechkin became the first Russia-born captain to lift the Stanley Cup and was awarded the Conn Smythe Trophy as the most valuable player in the play-offs.

"In between the second and third we had the same feeling in our locker room, no-one was panicking and everyone was confident," said Capitals goaltender Braden Holtby.

"We knew we could pick it up a level and everyone did an absolutely amazing job." 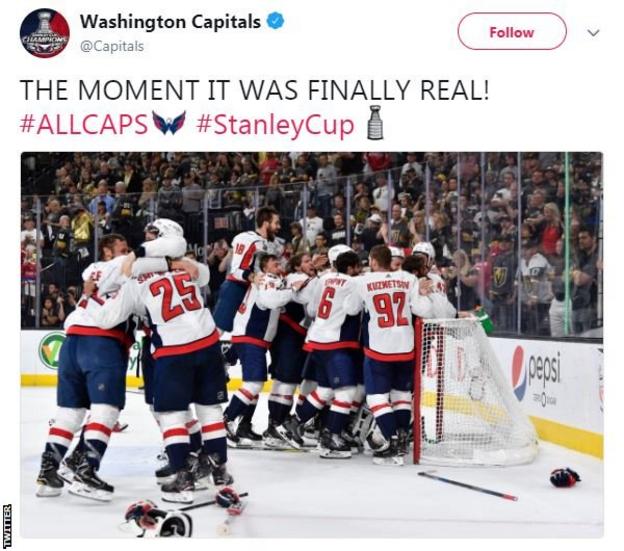