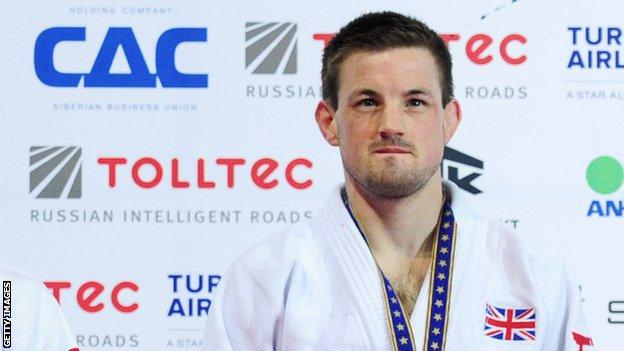 Colin Oates has admitted he would be "massively disappointed" if he was not selected for London 2012.

Britain's number one in the -66kg class is preparing for next week's European Judo Championships, the last ranking event for Olympic qualification.

"Unless something goes disastrously wrong I'm in a good position," the 28-year-old told BBC Look East.

"I'll never count my blessings until I see the piece of paper that says I'm going. But I'm in a strong position."

The 2012 European Judo Championships will be held in Chelyabinsk, Russia and will run between 26 - 29 April. British selectors are expected to meet to discuss their Olympic selection shortly afterwards.

He added: "I'd be massively disappointed at this stage not to get selected."

As the host nation, Britain can select a competitor in each weight category for London 2012 and Oates, from Norfolk, saw his chances improve considerably by the retirement of rival Craig Fallon earlier this year.

Oates won bronze at last year's European Championships and expects to exceed that accomplishment in Russia.

"I got a medal last year and I'm thinking I want to win it this year," said the world number 26.

"You don't want to go into the same event looking for the same medal. You want to improve.

"For the time being I've put put the Olympics away. When the Europeans are done, it's going to be harder to do that.

"It will be about the Games and the preparation for that."

With his qualification for 2012 all but assured, Oates has refused to ease his training in order to reduce the chance of injury.

"In other sports you can push too hard. But in judo the injuries come from things you wouldn't expect," he said.

"The times I've been injured have been from an innocuous fall rather than pushing too much."