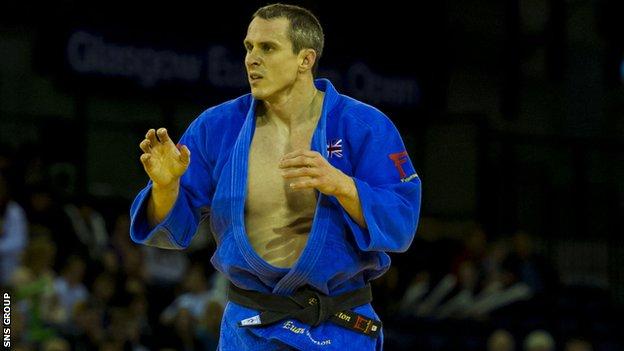 The 34-year-old won the European Open in Glasgow in October to reignite his chances of a Games place after a disappointing London Olympics.

He told BBC Scotland: "My priority is coaching. A successful Games for me would be a successful team for Judo Scotland, not for me individually.

"If I get success individually that's great, but the team is the main thing."

Burton fought in the sub-81kg category in London two years ago but has since moved up two weight classes and now competes in the -100kg class.

But his focus is on coaching's Scotland's elite judo players at Judo Scotland's centre in Ratho, west of Edinburgh.

"If I do make the Commonwealth Games team, I'll need to up the training.

"It's great that the Institute of Sport and the people at Judo Scotland are aware of the dual nature of the role and they'll put things in place that mean I can do that."

Burton and his wife Gemma Gibbons, an Olympic judo silver medallist, were interested spectators at the Scottish Open at Meadowbank in Edinburgh on Saturday, where some of the Scot's students and team-mates were in action.

The competition was a domestic ranking event, with points won going towards qualifying for the British Championships at the end of the year.

"The big event for Scottish judo is the Commonwealth Games," added Burton.

"There are no qualification points for the Games at this tournament. It's below the level where the guys pick up points.

"But a lot of the players who potentially could be in the Commonwealth Games team use this as a run-out.

"It's an event that is close to the start of the year so it gives them an indication of where they are before those big international events start coming up that they can use for the Commonwealth Games and the European and World Championships later in the year.

"It's good to have an event at the start of the year that's not quite life or death and a few of the guys have found out where they are."

Among those were Patrick Dawson, Sarah Clark and Samantha Clark.

That trio head to Bulgaria in two weeks' time for a tournament that offers ranking points for Commonwealth Games qualification.

Burton continued: "Our Commonwealth Games guys were given a year's qualification period from April 2013 to April 2014 and they can earn points at the likes of European Open tournaments, Grands Prix, World Cup, Grand Slams and European and World Championships, so it's fairly high level events.

"The International Judo Federation calendar is pretty packed. It's almost every weekend.

"Some of our guys are fighting in some events, not in others, so it's going to be ding-dong all the way to May this year."