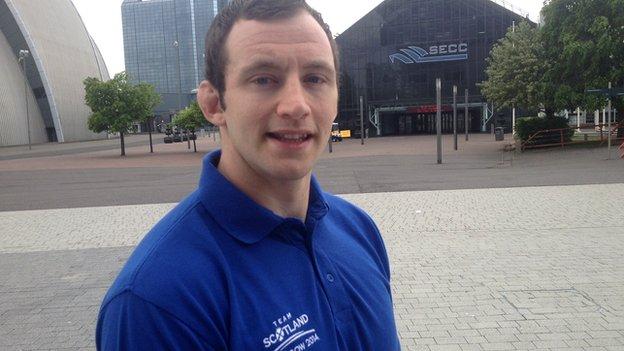 He's back in Glasgow, his home city, though that's not obvious on hearing his Lancashire accent, and he has been picked to represent Scotland in the Commonwealth Games for the first time.

The 28-year-old is beginning to reap the rewards of hours on the mats and in the gym. Two weeks ago he won gold in the under-90kg category at the London British Open Senior European Cup.

What's more, he is buoyant about his personal life, too. He's quick to express his gratitude to his girlfriend Sarah for moving from Bath to Edinburgh with him to further his judo career.

And his studies for a Masters degress in strength and conditioning are progressing well.

Burns was one of 14 judokas, seven men and seven women, to be announced as Team Scotland members for Glasgow 2014 at the city's SSE Hydro on Wednesday.

They seem a tight bunch, the practice sessions at Judo Scotland's Ratho base cementing friendships.

Unlike, say, in boxing, Commonwealth Games Scotland permits two athletes to be selected in the same weight category so Burns and his friend Matthew Purssey will compete for medals in the sub-90kg division.

"I'm really happy to be part of the team. I've been looking forward to this day," Burns tells BBC Scotland.

"We've known for a few weeks now we had made the team but it had to be hush-hush.

"I can't wait. I'll try to use the home support to fuel me and hopefully it will bring out a better performance."

Burns is used to fighting in front of large, partisan crowds. He speaks of audiences of more than 10,000 judo fans in Paris watching him take on the home favourite at a Grand Slam event.

He thinks the judo medals in his category will go to Scottish, English or Oceanic players, but his European Open win in London has given him belief he can be in the mix.

"That told me I had made the right decision to move back to Scotland to train," he says.

"It shows that things are going well."

He lived in the Possilpark area of Glasgow until he was 10, before moving to Blackburn during his secondary school years and then to the University of Bath.

Part of his delight at being in Team Scotland is that his relations will be there at the Games to cheer him on.

"One of my parents is here and my family are going to get to see me fight in my home city," he says.

"I'm usually in Asia or Eastern Europe fighting so it will be really special to fight in Glasgow."

Burns joined Shadsworth Judo Club in Blackburn at 15. One of his best friends was in the British team.

"I was a footballer and in the same class as him and he beat me up quite a lot," he jokes.

"I thought, 'I'd rather do this than kick a ball about. It's fun to fight people'."

He went from doing one session a week to practising full-time in the space of two years. Now, his sparring partners at Ratho include Scotland team-mate and Olympian Euan Burton.

"He beats me up and then tells me how he was able to beat me up. It's instant feedback," he remarks.

"He has been a great help to me. So, too, has my girlfriend. She left her friends and family and supported me and moved to Edinburgh with me.

This weekend Burns will compete in the European Open in Spain, which is the beginning of the two-year qualifying period for the Rio Olympics. After that, he'll head to Slovenia for a tournament, then join a training camp to get ready for the Commonwealth Games, which does not provide Olympic ranking points.

"There are 25 or 30 tournaments per year, from Australia to Samoa to Mauritius to America, and the likes of Georgia," he adds.

"It's a hard slog and we're away quite a lot of the year but I wouldn't like to do anything else."

In time, he hopes to establish a career based on his sporting achievements and his course at the University of Edinburgh.

"My studies help me understand the training process and put me in good stead for the future," he says.

"When you're killing yourself on a rowing machine you know the reason you are doing it, rather than just the coach telling you to do it. You can push yourself harder knowing it's the right thing to do.

"I'll have the practical experience of being an athlete and the theoretical side from my course. They should work together when I go into coaching when I finish."

Burns must hope things combine just as well on the mats at the SECC on 24-26 July.