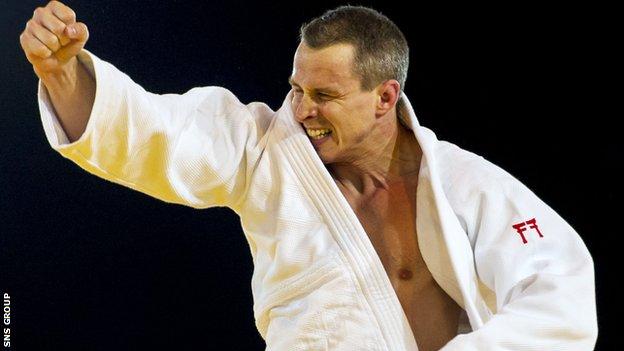 The 35-year-old was Scotland's flag bearer in Glasgow and his triumph in the 100kg division was one of 13 judo medals for the host nation.

"I could not have imagined a more fantastic end to my competitive career," said Burton.

He will continue in his role as a high performance coach for the sportscotland Institute of Sport.

If I could fight forever, perhaps I would. However, the hair is getting greyer and the muscles sorer

"What excites me most is that I can now be instrumental in creating an environment for athletes that allows them to perform consistently at the highest levels," said Burton.

"It is an exciting time for Scottish and British sport with the 2016 Rio Olympic Games on the immediate horizon and the 2020 Tokyo Games returning Olympic judo to its homeland. I am delighted to be involved in preparing the champions of the future.

"If I could fight forever, perhaps I would. However, the hair is getting greyer, the muscles sorer and it is now time to leave the winning of medals to those younger and stronger than myself."