Jon Jones says he can be the comeback story the American people want when he returns after a 17-month absence to face Alexander Gustafsson at UFC 232.

The 31-year-old was stripped of his light-heavyweight title after testing positive for a banned substance before fighting Daniel Cormier in July 2017.

Jones could regain the now vacant crown in Los Angeles on Saturday.

"Having the sport taken away from me has shown me how much it really means to me," said the American.

It was the third time Jones had been suspended by the UFC and the second because of a doping violation, though he was found to be "not intentionally cheating".

But controversy came Jones' way again this week when the UFC announced it would be moving the entire 232 card from Las Vegas to California.

It came after remnants of a banned substance were found in Jones' system from the positive test that saw him suspended last year.

UFC president Dana White said the Nevada State Athletic Commission - which licenses the fight - would not have time to investigate the findings before Saturday's bout, but the commission in California were willing to license the fighter.

Jones - whose other ban followed a hit-and-run incident he calls his "biggest regret" and served an 18-month supervised probation for - insists he appreciates the sport more now as he prepares for a rematch of his 2013 fight with Gustafsson.

"It all means a lot more to me now," he said. "Most things are forgivable, especially in American culture. I feel like in America people love a comeback story.

"What I have got to do when I am back is make less mistakes and show signs of growth, and I feel like I have grown tremendously."

Despite admitting he "cares about losing fans, everybody wants to be a liked person", Jones says he is not worried about being the perfect role model.

Asked about what his legacy would be, Jones added: "Just a bad dude, man.

"One thing I am realising is being a champion, you don't have to wear a suit every day. You don't have to be politically correct and all the kids look up to you because you're such an angel, who said that's what a champion has to be?

"Call me a good person, a bad person. Call me a hypocrite, call me what you want. I know I am a bad dude. The baddest dude with the biggest heart."

He is also not paying much attention to whether he will be considered the greatest of all time once he retires.

"I don't think one fight makes your career. I feel like it will always be up for debate, who is the best," said Jones.

"It's whoever is hot at the present moment. MMA fans are very quick to forget people's accomplishments, for example Anderson Silva is not even in the conversation any more, which is a shame. Jose Aldo... guys who have been kicking ass for years.

"One defeat, one close fight and now they're not the best any more. I just try to focus on the things I can control."

This is the fight I was waiting for - Gustafsson 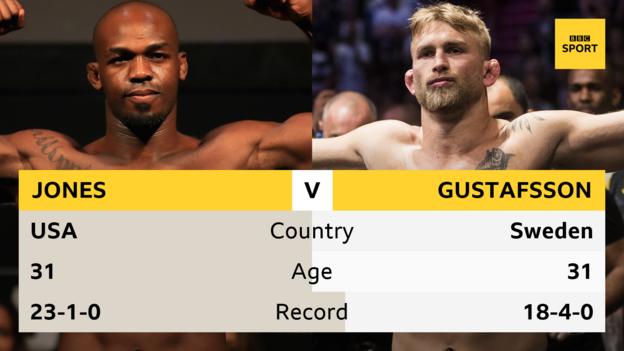 Jones took the what was an incredibly close and brutal first bout between these two by unanimous decision five years ago, something Gustafsson has questioned since.

The Swede says his loss was tough to accept, but is confident he can win a world title at the third attempt after defeats by Jones and Cormier.

"I am different fighter today than I was five years ago," he said. "This is my time, I feel this is the time this fight should happen.

"I am feeling no pressure at all and am just enjoying every second of it. I am living the dream right now. Five rounds for me these days is not a problem for me.

"This is the bight fight I have been waiting for and training for my whole life.

"This is me beating the best guy out there, the guy that has never been beaten and taking his place. It's the biggest thing for me right now."

Gustafsson also says he has not paid attention to a social media spat between Jones and Cormier, where the pair have been calling each other out for a third fight.

"I'm here to be the world champion, to beat Jon, nothing else," said the 31-year-old. "They can write whatever they want to each other on Twitter, I am here on a mission and that is to beat Jon.

"I am a different type of fighter now, I have been developing everything in my arsenal - I am faster than ever, I am a smarter fighter, every aspect of the game is so much better right now."

And Jones admits, despite getting the win, he was underprepared against Gustafsson in 2013.

"Alexander brought a different game and it was something none of my team-mates had prepared me for and we overlooked him completely," said Jones. 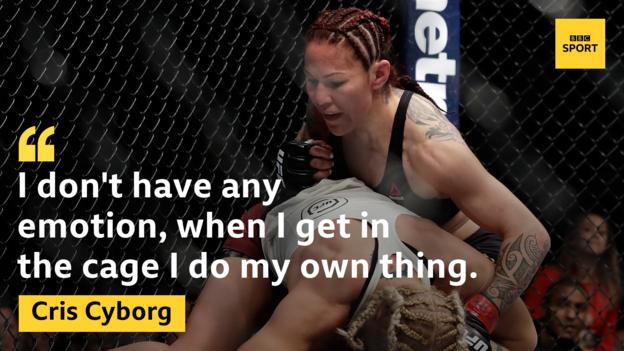 Also on the card is a much-anticipated match-up between Cris Cyborg and Amanda Nunes for the women's featherweight title.

Cyborg is undefeated in 13 years since losing on her MMA debut to Erica Paes, has defended her title three times and finished 17 of her 20 victories on the promotion via knockout.

The 33-year-old has talked of her desire to compete in a professional boxing fight at some point, but says this will not be her last MMA fight.

"Let's see. I have my dream, but my focus is my next fight," said the Brazilian.

"I don't think this is my last fight, I have a dream to have a boxing fight but this isn't my last fight. It would open an opportunity for women's boxing too.

"I take every opponent very seriously. The fight against Nunes will be great exposure, not just for me but for the whole of MMA.

"I don't have any emotion here. When I get in the cage I do my own thing."

'It's not personal, it's business'

Nunes will be gunning for Cyborg's featherweight crown as she aims to become the first female two-weight world champion.

The bantamweight title holder says she told UFC she was willing to move up and take whatever fight was offered after feeling her division had stalled.

"Cris is the best in her division and this fight will put me on another level," said Nunes. "I am focused now to make history.

"I feel amazing right now. I feel like I am ready for battle. I know this fight is going to be a battle."

The 30-year-old Brazilian, who says she feels more natural at 145lbs, believes a win against Cyborg on Saturday would prove bigger than her victory over Ronda Rousey two years ago.

And Nunes says the fight can elevate women's MMA to unprecedented levels.

"I am healthy, physically amazing, in the best shape I have ever been before and my mind is so focused for this moment in my career," she said.

"I don't have anything against Cris, she is the greatest, the best champion in her division, and I am happy to share the cage with her - it's nothing personal, it's all business.

"This fight is key to putting women's MMA on the top. This is the big thing, it's not about me, not about Cris, it's about women's MMA.

"We want to put on a show for all the women that look up to us."