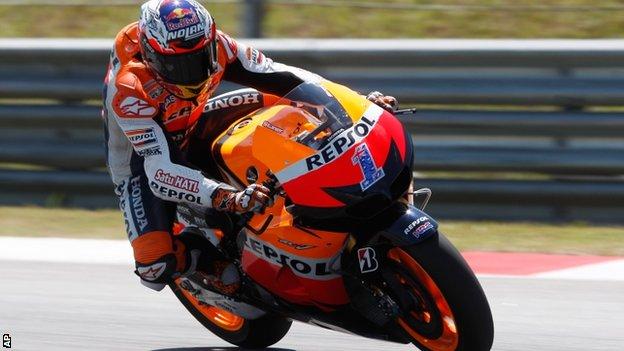 Casey Stoner topped the timesheets on a weather-affected first day of pre-season testing in Malaysia.

Stoner - the defending MotoGP champion - managed a best lap of two minutes 1.761 seconds on his 1000cc Honda, ahead of Repsol team-mate Dani Pedrosa.

Stormy weather and unusually high temperatures touching 40C meant there was no improvement in a wet afternoon session in Sepang.

Stoner said: "This afternoon I have no doubt we'd have gone a second faster."

The Australian dipped under the two-minute mark during the first test at Sepang earlier in February but could not get near that time as heavy rain washed out most of the afternoon.

He added: "The first day of testing has gone well, we started off where we left last time but the track conditions have been a little worse.

"We have a some work to do, but the rain came out and the track didn't dry up enough to warrant going out so we'll wait until tomorrow."

British rider Cal Crutchlow was seventh quickest on his Tech3 Yamaha, and he bemoaned the poor track conditions.

He said on Twitter: "First day of testing at test was ok. Had not too much to try and track was in really bad condition. There was a car race here and car testing has made track so dirty and slick. All times nearly two seconds slower [than last test].

The three-day test continues on Wednesday and Thursday, with a further test scheduled for Jerez in Spain on 23-25 March.