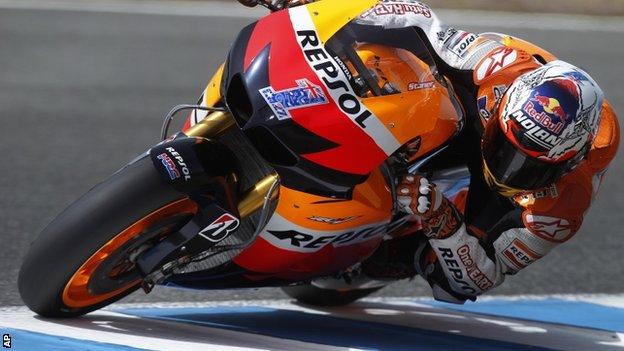 Reigning champion Casey Stoner was quickest on the first day of pre-season testing at Jerez.

The Australian spent most of the day down in fourth place before posting a late fast lap to put his Honda top.

Jorge Lorenzo - who said this week he - was second, with Dani Pedrosa third.

"Today has been quite good, we did race distance with a soft set tyres this morning and we were getting quicker and quicker as we progressed but I think also the circuit was getting better," Stoner said.

"We tried a few things with the chassis as the bike was proving slow to turn in the corner but in general it is working well especially at the end of the tyre life. On the last exit we did our fastest lap on a new soft rear tyre. It's been a good first day".

However Pedrosa was less upbeat, saying: "It's been a pretty tough day, the mechanics had a lot of work to do in the garage and I've been stationary a long time, so it was not easy to get into the rhythm quickly.

"But I'm happy because we have a clear idea about the changes we need to do on the bike to improve tomorrow, especially on braking and the exits of the corners."

Seven-time champion Valentino Rossi continued to struggle on the Ducati though, ending the day in ninth place, nearly two seconds slower than Stoner.

The three-day test continues until Sunday, with the first season race in Qatar on 8 April.