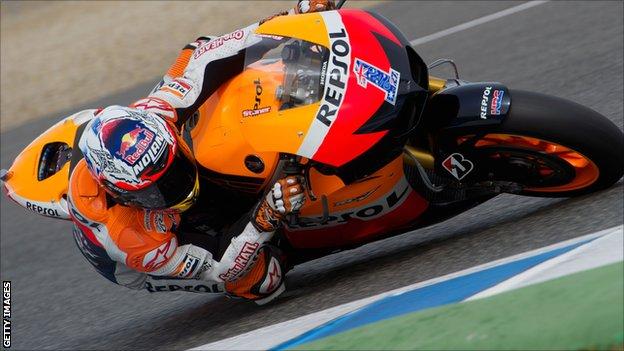 Defending champion Casey Stoner was fastest on the final day of MotoGP testing in Jerez.

Stoner could only manage three laps on Saturday's second day of testing before heavy rain intervened.

With favourable temperatures at the circuit in southern Spain on Sunday, the Australian clocked a fastest time of one minute, 38.780 seconds.

Jorge Lorenzo was second quickest as teams concluded their testing before the first race in Qatar on 8 April.

Stoner steadily improved his time throughout Sunday, claiming top spot within the last 15 minutes before improving on his time on his 61st and final lap - the best of the weekend.

The Australian said: "We were really pleased with the lap times we're running, but I think we can still improve the bike quite a bit before the race here.

"In general we're satisfied with how the whole test has gone for us. Now we can go racing which is what we really enjoy."

Lorenzo had occupied the lead for the majority of the day before Stoner bettered his time of one minute, 38.953 seconds.

The Yamaha Factory Racing rider said: "We need to improve our braking a little, if we can do that we could gain some more tenths of a second."

Nicky Hayden clocked the fastest time on Saturday, but the 2006 champion could only manage eighth-quickest on Sunday and he was keen to look ahead to the opening race of the season in Qatar.

"I'm not thrilled with my lap time because I thought I could go a bit quicker but I struggled a little with the fast corners," claimed Hayden.

"We've clearly got some work to do, but now it's time to get ready for Qatar, and I look forward to starting the season. Now it's time to see what we've got when we put the cards on the table."