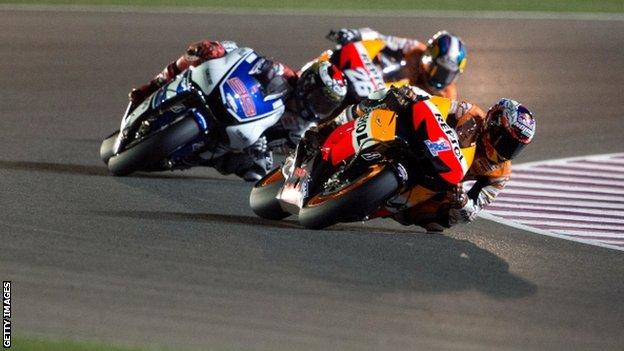 Reigning MotoGP champion Casey Stoner heads to Jerez for round two of the 2012 season looking for his first win at the Spanish circuit.

The Australian was third in the where he struggled with arm pump.

He said: "Since Qatar I've been working on the arm pump I experienced in the race and it's definitely better.

"We've treated it the same way as when I had it in 2010 at Silverstone so I'm hoping it won't be a problem."

Stoner, 26, has won 33 races since beginning his MotoGP career in 2006, but has only scored one podium at Jerez, when he finished third in 2009.

His best chance of a victory was scuppered by Valentino Rossi's controversial move last year, which led to Stoner's only non-podium finish in his title-winning season.

This year, the Australian heads to the Andalucian coast exactly one month after but doesn't appear too optimistic about his chances of victory.

"It doesn't ever seem to matter what happens at Jerez, every good championship I've had my results there have always been pretty average," he said.

"Last year it ended up being the worst result of the year but we still won the championship."

Fresh from his success in Qatar - and with an important nine-point start over title rival Stoner - Jorge Lorenzo will feel himself the favourite going into the first of his four home races.

Both Lorenzo and compatriot Dani Pedrosa are strong in Jerez; Lorenzo has won there for the last two years, while Pedrosa has never been off the podium in the premier class, with a win in 2008.

Lorenzo said: "I expect Casey and especially Dani to be very fast.

"Qatar was a perfect start to our season, now we get to race in front of our home fans, I will try to make sure we make a good show for them. Let's hope it doesn't rain this year."

The Spanish have dominated at Jerez recently - in the last two years Andrea Iannone in Moto2 has been the only non-Spaniard to win at the track across the classes.

In Moto2, Brits Scott Redding and Bradley Smith will be hoping their recent race battles will be further up the order this time around as they look to close the gap to the front.

Marc Marquez's win in Qatar dispelled the doubts held by many, including himself, that he would be able to win from the word go, having sat out most of winter testing recovering from injury. The young Spaniard will surely be the favourite for the win going into his home race.

In Moto3, Qatar race winner and title favourite Maverick Vinales looks set for tough competition from new contender Romano Fenati, while Brit Danny Kent was one of seven riders in the hunt for a podium last time out.