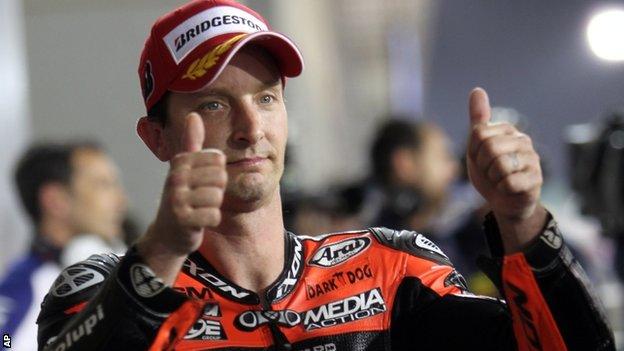 Colin Edwards will miss the French MotoGP on 20 May after successful surgery to mend his broken collarbone.

The 38-year-old after he was injured when he was knocked off his bike by Randy de Puniet in qualifying.

Edwards will be replaced at Le Mans by Australian rider Chris Vermeulen, who last rode in MotoGP for Suzuki in 2009.

Vermeulen said: "I am excited to be racing at the top level of motorcycling again and look forward to the race."

Who is Chris Vermeulen?

American Edwards - twice a World Superbike champion - had not missed a MotoGP race between his debut in 2003 and breaking his right collarbone last June - after which he recovered to finish third at Silverstone just nine days later.

He was operated on by Dr Javier Mir in Barcelona and will now recover at his home in Texas before returning for the Catalunya Grand Prix on 3 June.

Dr Mir said: "Colin's left clavicle was broken in five pieces and required the insertion of a titanium plate with 10 screws.

"The surgery performed was successful and he will be able to begin rehabilitation and physical therapy within a week."

Forward Racing team boss Marco Curioni said: "Several members of the team have previously worked with Chris Vermeulen and I believe that he will immediately find a good feeling with the team.

"Vermeulen is an expert rider in MotoGP, he has previously won at Le Mans and knows the track well.

"I would like to wish Chris good luck and send all my best wishes for a quick recovery to Colin."