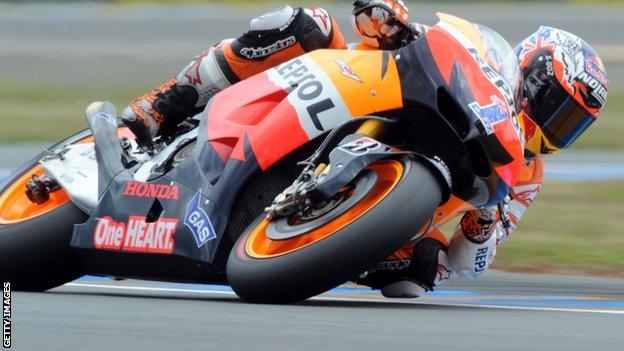 Casey Stoner showed no signs of slowing down as he topped the timesheets during practice for Sunday's French Grand Prix at Le Mans.

Stoner, 26, announced his shock plans to retire at the end of the season on Thursday but was again quickest.

He set the benchmark lap of one minute 33.74 seconds in the afternoon session, after also topping the morning times.

Stoner said: "After yesterday's announcement, I definitely felt a weight off my shoulders when I got on the bike this morning.

"The last two races I've had a lot of thoughts running through my mind and this weekend I already feel better knowing it's off my chest and we can now focus on the rest of the season, and try to enjoy it".

Crutchlow said: "We have a couple of small problems but nothing I don't think we can fix ahead of the race.

"I can't get the bike to turn into the corner as I'd like and I'm losing a little bit of time in that area.

"To be honest, Le Mans is not the best circuit for me and it is quite difficult.

"I've only been here once before and I crashed in the race last year, so a big part of my job was just trying to gain some more experience with the layout.

"It was still a positive day and, with an improvement to the turning of the bike, I'm sure I can be even more competitive."

British rider Scott Redding was fastest in the second session of Moto2, while Maverick Vinales set the pace in Moto3.