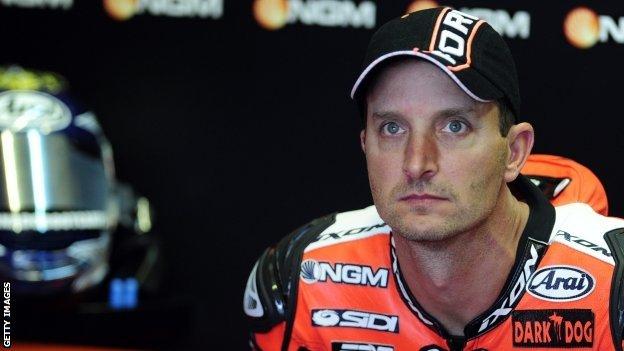 MotoGP veteran Colin Edwards has confirmed he will be fit to race at this weekend's Catalunya Grand Prix.

The 38-year-old has missed the last two races after breaking his collarbone in qualifying for the Portuguese Grand Prix at the start of May.

But after surgery the American will return in Barcelona.

He said: "I've been swimming a lot these last few days and it feels good, I have full movement and it doesn't hurt. I'd say I'm at about 90% now."

Edwards - twice a World Superbike champion - had not missed a MotoGP race between his debut in 2003 and breaking his right collarbone last June - after which he recovered to finish third at Silverstone just nine days later.

He broke his left collarbone three weeks ago and has now had staples removed and has been able to exercise with full mobility.

"I'm looking forward to this weekend."

Edwards' best result on the Forward Racing CRT bike so far this season was 12th in Qatar.