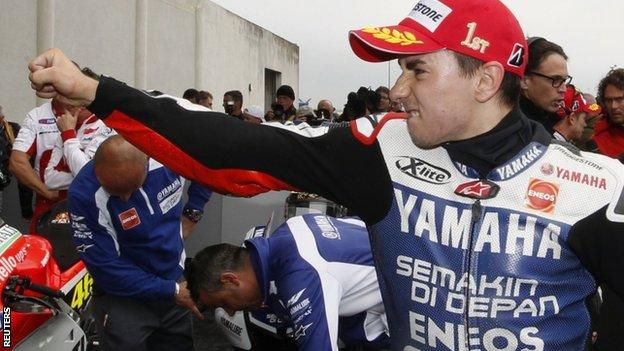 It is just a fortnight since Casey Stoner stunned the MotoGP paddock by announcing his retirement, but already the wheeling and dealing has begun.

With Stoner leaving Repsol Honda at the end of the year, one of the plum seats in the sport is up for grabs, and with almost every rider out of contract at the end of the season there is plenty of talking to be done.

If Honda want to continue their domination then top of their shopping list has to be Jorge Lorenzo.

To replace Stoner is almost an impossible task but Lorenzo is the outstanding candidate.

He has won 19 MotoGP races in his fledgling career and knows what it takes to win the world championship. He has to be Honda's number-one choice, but whether or not he would jump ship from Yamaha is another matter.

Lorenzo is in the middle of negotiating to stay with Yamaha and this news will certainly have helped him add a few zeroes to the end of his pay cheque. He won't be rushing into anything but Yamaha will be desperate to keep him - especially as he could yet win this year's title.

The Spaniard is the key to the whole puzzle. Once he decides where he will be next year, everyone else will fight over the remaining seats.

Would Honda look at Valentino Rossi? I don't know. In many ways, it would be a dream fit for everyone but Honda need to decide whether Rossi can still cut it.

That's a ridiculous thing to say about a nine-time world champion but Honda need to know for sure.

If the Italian did end up back at Honda though - where he won three titles before his move to Yamaha - it would be a sensational story and maybe the boost the sport needs.

The other man who could benefit is of course our own Cal Crutchlow.

The Briton is the most improved rider on the grid, he has taken the next step and potentially there will be factory teams looking at him for next year.

He has said that he wants a move on to a full factory bike next year and there is no doubt he will be in the mix if he keeps up his form and even gets on the podium.

The transition from last year to this has been immense.

His preference is to stay with Yamaha and you have to say that Ben Spies' position in the factory Yamaha team is precarious at the moment. Watch this space.

The speculation and whispering will go on at every race weekend for the rest of the year. We now have a fascinating campaign off the track as well as on.

Back to the current campaign, and there is the chance of showers again in Barcelona on Sunday but that won't dampen the huge support for Lorenzo and countryman Dani Pedrosa.

But the man they've all got to beat as usual is the semi-retired Stoner.