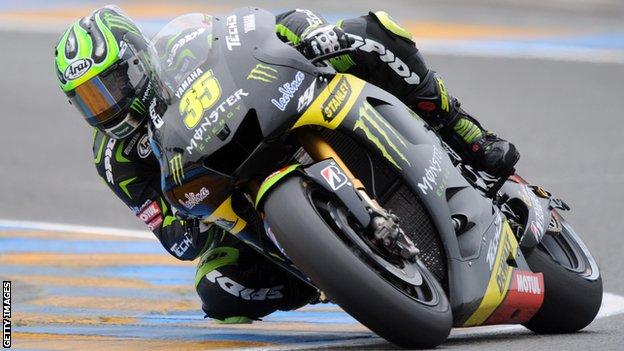 British rider Crutchlow is seeking his first podium finish and looked sharp ahead of Saturday's qualifying round.

Spanish rider Lorenzo, who has an eight point lead in the overall standings, topped the timesheets in Barcelona ahead of compatriot Alvaro Bautista.

"The bike was working well, but we can definitely improve it for the rest of the weekend," said Crutchlow.

Crutchlow has been excellent on his Tech 3 Yamaha this season and lies fourth in the standings on 45 points.

He has consistently been the top non-factory rider this season and has finished fourth twice.

Reigning champion Casey Stoner of Australia, second in the standings, was the only rider not to go faster than in the morning session while Valentino Rossi also endured a disappointing practice.

Seven-times champion Rossi finished the session almost 1.5 seconds off the top in 12th spot after being forced to switch to his second bike shortly before the end.