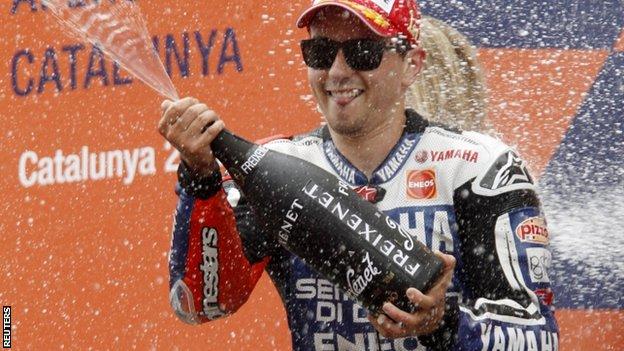 Jorge Lorenzo has now opened up a commanding-looking 20-point lead at the top of the MotoGP championship.

But I still make Casey Stoner favourite to retain his title.

Lorenzo was leading the championship going into Silverstone last year and it all went wrong when he crashed out.

I'm not wishing ill luck on him at all, but if he didn't finish and Stoner did then that points gap would be wiped out in one race.

But you have to say that Lorenzo was faultless in Barcelona. It was a stunning performance.

Dani Pedrosa pushed himself to the limit to try to get that win but he couldn't hold off Lorenzo forever and the Yamaha looked the better package overall.

The result is good for the championship because I still expect Stoner to be the man to beat, even though he looked to be suffering with some handling problems again here.

He was outside the top three for the first time in over a year and he looked pretty grumpy about it. He'll be as wild as an angry bear and there's clearly been no letting up from him at all despite his retirement announcement.

People might see that he finished fourth and think he is taking it easy now but he was on pole here, and just couldn't get it together on raceday.

The Honda looks a complicated bike to ride at times and Stoner was struggling with it.

But make no mistake, he is as determined as ever to win the championship as he will want to go out on a high.

It was another strong ride from Cal Crutchlow to finish fifth, and for a lot of the race the Briton was held up by Stoner.

If you had told him at the start of the year that he would be held up by the world champion by round five I don't think he would have believed you.

It was a solid ride but he needs to work on his starts as he didn't get away well and that ultimately cost him a chance of that maiden podium.

He will have been annoyed that he was beaten by Andrea Dovizioso, who came home third. It's always annoying losing out to your team-mate but especially when it means he is on the podium instead of you.

So no podium for Cal yet - but it's coming, and where better to do it than at his home race at Silverstone in a fortnight's time?