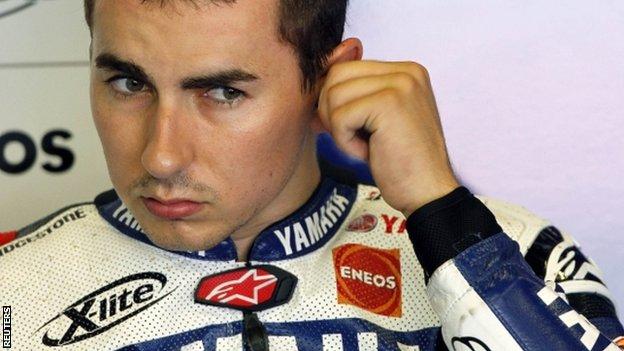 Spanish rider Jorge Lorenzo has revealed he turned down an offer from rivals Honda before signing a two-year contract extension with Yamaha.

"It was a very difficult to make the decision because I had another offer from Honda," said Lorenzo.

"But finally I had to go with my heart, and my heart said Yamaha."

Championship leader Lorenzo, 25, who was understood to be top of Honda's wish list, joined the Japanese team in 2008 and won his maiden MotoGP world title in 2010.

"Normally there is more time to decide, but this time I just said yes when they made me the offer," added the Spaniard ahead of this weekend's British Grand Prix.

"For this reason, I'm a little bit less worried and more focused for the next races."

Lorenzo has had mixed success at Silverstone since the track took over as host of the British Grand Prix from Donington Park in 2010.

The 25-year-old won the race in 2010 with a dominant performance but crashed out spectacularly in the rain last year - and similarly treacherous conditions are expected on Sunday.

"In 2010, I enjoyed riding this circuit and I felt very comfortable from the beginning," said Lorenzo. "The race couldn't have been better and I won with a huge advantage.

"But last year I crashed while trying to catch Casey in the rain so my memories are a little bit sweet and sour.

"The [weather] forecast is bad, and it's not a thing that makes me happy but this is the way it is. We will race with the weather."

Stoner, who won the race last year, is relishing the chance to compete at the circuit for the last time.

"But the other 90% is still fantastic and I'm looking forward to getting back out there."

British rider Cal Crutchlow, who is in his second season of MotoGP, has finished in the top five in four of this season's five races and is keen to forget last year's race when he crashed out in qualifying and failed to start the race.

"It's nice to come here in not so bad form," said the Tech 3 Yamaha rider. "The worst finish we've had this year is eighth. Last year I would have bought an eighth place.

"We've been battling near the podium this season. We've not been close to the front all the time, but there or thereabouts. I'm looking forward to it and hopefully I'll make the grid this time."