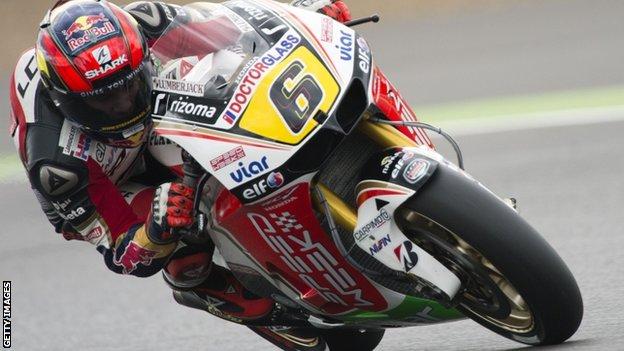 The MotoGP circus heads to Germany this weekend where all eyes will be on Stefan Bradl in his home race.

The 22-year-old Moto2 champion has made a solid start to life in MotoGP, with a best-placed finish of fifth so far.

But now he faces the 'Cal Crutchlow' effect as a nation starved of success at the highest level of motorcycle racing turns out to cheer him on.

We have seen with Crutchlow - who has crashed heavily in both British Grands Prix since he joined MotoGP - that pressure can affect even the top riders.

Bradl faces a weekend as the local hero and will be hoping to avoid a repeat of last weekend when he crashed out in Assen.

There has not been a top German rider for years. Ralf Waldmann had a good career but was never a big name, while their last world champion was Dieter Braun in 1973.

In recent years there has been the same paucity of talent there that we have had in Great Britain.

Despite the lack of home success, the crowds are always excellent at the Sachsenring and the organisers have just signed a new contract to keep the race there for the next five years.

A huge amount of people come across from Eastern Europe - it's a great spectator track with lots of undulation.

It's the second shortest track behind Laguna Seca - it's tight and twisty and it will suit the most agile bike.

Dani Pedrosa has won the last two races there and is overdue a victory - he looked good at Assen before being overtaken by Casey Stoner and he needs to start picking up a few wins to keep his faint title hopes alive.

Alvaro Bautista will start from the back of the grid on Sunday after his crash with Jorge Lorenzo.

We won't see him all weekend, he'll have his head down. I feel sorry for him, I know he made a monstrous mistake but he knows it, and you can't turn the clock back.

Bautista will have a tag now of being a dangerous rider - everyone will be analysing his every move for the rest of the season.

The last German rider to win a premier class Grand Prix was Edmund Czihak, who won the 1974 German GP

Lorenzo won't have lost any confidence from the crash as it was not his fault at all - he was a passenger sliding along the road and I expect him to be back in the hunt.

As for Crutchlow, every week we subliminally heap pressure on him by saying this could be the week he gets on the podium.

While we keep saying "next week, next week..." he is now a solid fast rider in the top five, so it has got to happen sooner or later.