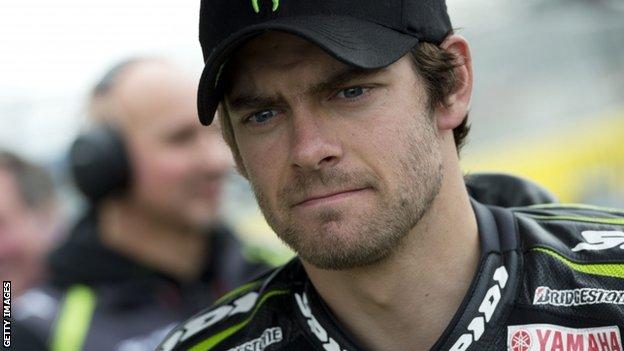 Cal Crutchlow has confirmed he is in discussions with Ducati about joining their factory MotoGP team next season.

Crutchlow, 26, has had an outstanding season for the Tech 3 Yamaha team but wants a factory ride for 2013.

The Briton told BBC Sport: "We're in deep discussions with [another manufacturer] because at the moment there's nothing for me at Yamaha.

The best bikes in MotoGP are the six in the factory teams of Yamaha, Ducati and Repsol Honda. They benefit from updates and higher spec machinery before the other teams, who lease their bikes from the factories.

Crutchlow, who has been a regular finisher in the top five this season, has made no secret of the fact his first choice is a step up to the factory Yamaha team to partner Jorge Lorenzo next season, but that option has seemed increasingly unlikely.

With Lorenzo's current team-mate, Ben Spies, confirming this weekend that he is in talks to extend his contract, it seems that Crutchlow's choice is either sticking with his satellite Tech 3 outfit or gambling it all on Ducati.

The move to the Italian factory would be lucrative but even nine-time world champion Valentino Rossi has failed to make the bike competitive. Crutchlow has consistently been quicker than the Ducatis all season.

Rossi met with members of the Audi group, who purchased Ducati earlier this year, during the German GP weekend and is confident of an improvement in his team's fortunes.

He said: "I spoke directly with the boss of Audi and they have a strong intent about supporting Ducati in the future to regain its competitive edge. It's a very ambitious project and I'm happy about it.

"And they're counting on me."

Elsewhere around the paddock, Lorenzo is confirmed for another two years at Yamaha, while Stefan Bradl has already signed for 2013 as part of his two-year deal with LCR Honda.

Dani Pedrosa, has confirmed he is in talks about renewing his contract with Repsol Honda, with an announcement likely next week in Mugello.

Pedrosa is set to be joined by Moto2 title favourite Marc Marquez, who will have the huge shoes of the retiring Casey Stoner to fill following the abandonment of the Rookie Rule last week.

Crutchlow may not be the only Brit onboard Ducati machinery next year as Scott Redding's Marc VDS team in Moto2 are speaking with the Italian factory about leasing a bike for a new satellite team in MotoGP next year.

There could be up to five British riders in the premier class next year, with Bradley Smith set to join Tech 3 and Paul Bird's announcement to the BBC a few weeks ago that he is expanding his team to two riders in 2013.