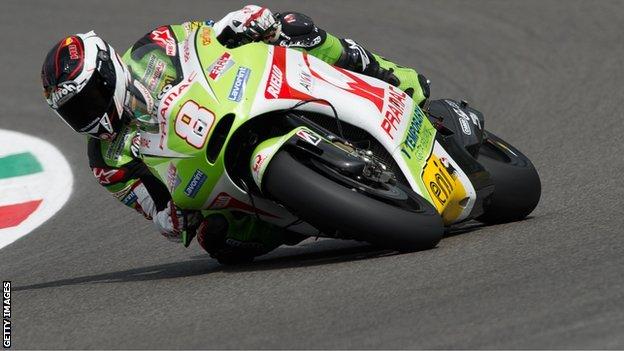 I have to think only about my injury and my rehabilitation

The 25-year-old Spaniard suffered the injury on Saturday during a training mishap and is also likely to miss the Indianapolis Grand Prix on 19 August.

His place in California will be taken by fellow Spaniard Toni Elias, who rode for the Pramac Racing team in 2008.

"Obviously I'm disappointed about the incident," said Barbera. "It happened in the worst period possible.

"I had a great feeling both with my bike and with my crew.

"I could catch other brilliant results in the next round in Laguna Seca and Indy, but it's life and now I have to think only about my injury and my rehabilitation."

Pramac Racing's sole rider, who sits 11th in the overall World Championship standings, could return for the Czech Republic Grand Prix on 26 August according to Doctor Xavier Mir, who carried out the operation on Barbera's left tibia and fibula.

Dr Mir said: "It is difficult to say how long the post-surgery rehabilitation will take. We need to evaluate the progress of the patient, but I think that we can reasonably think that he will able to run a race in four or six weeks, according to his feedback."

Former Moto2 world champion Elias made his international racing debut in the 125cc World Championship in 2000, and took his first win in the Dutch TT at the Assen circuit.

He had been riding with the Aspar Racing team until last week when the association was ended by mutual consent.