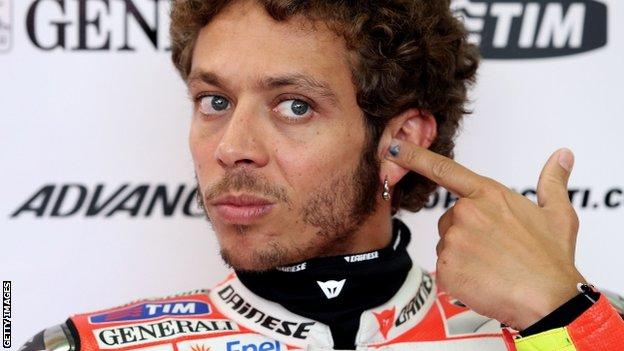 Valentino Rossi will decide his MotoGP future "in the next few weeks."

Nine-time world champion Rossi is out of contract at Ducati at the end of the year and has been linked with a return to Yamaha to replace Ben Spies.

He said: "I have spoken a lot with Ducati for next year and I am still waiting for some details and some important things with the contract.

"I have also some other options for next year but I think the situation will be more clear in the next weeks."

Spies' announcement on Tuesday that he was leaving Yamaha at the end of the season sparked speculation about Rossi returning to Yamaha to partner Jorge Lorenzo, who recently extended his own contract with the factory until 2014.

Rossi and Lorenzo had a turbulent relationship for two years at Yamaha when Lorenzo joined the team as a rookie and immediately challenged Rossi for the title, beating him to it in 2010.

Rossi then left for Ducati in what should have been a dream Italian partnership, but instead has endured a difficult two years with the team, unable to get to grips with the bike despite a series of major updates.

Rossi's future with Ducati has seemed increasingly uncertain and in the Thursday news conference for this weekend's race at Laguna Seca he confirmed that he was talking to another manufacturer.

He said: "I think in the summer break I will decide for next year."

Despite their previous relationship Lorenzo has welcomed the idea of Rossi's return to the team where he won four world championships between 2004 and 2009.

Lorenzo said: "It could be a good thing for Yamaha because we were a good pair in the past.

"The preference is to have a competitive rival in the same team. It would be a good stimulation for me to be better and faster each year."

Spies meanwhile is remaining tight lipped on both his reasons for leaving Yamaha and his future plans.

The American said: "I've known for quite a while what my personal decision was and I thought it was the right time to do it with all the contracts happening with other riders.

"There are a litany of reasons behind it and just to get back to being stress free and finish out this season strong. That's all that's going to be said about it at this point until I'm ready to talk about the future."