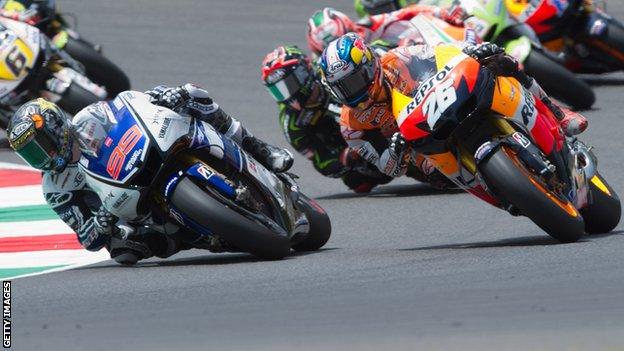 Dani Pedrosa was quickest in the first and second practice sessions at the US Grand Prix at Laguna Seca.

The Spanish rider clocked one minute 21.424 seconds in the first session on Friday before shaving 0.336 seconds in the second to break the circuit record.

"The times have been fast from the beginning and we got into the pace quickly," said Pedrosa.

His compatriot Jorge Lorenzo was second by 0.334 seconds while world champion Casey Stoner was third.

Crutchlow, who was unhurt in the incident heading into turn 10, clocked a fastest time of one minute 22.258 seconds.

He is currently fifth in the World Championship table which is headed by Lorenzo, but Pedrosa is second, and he was pleased with his performance in a difficult environment.

"I did my first two runs with my current bike and the last one with the new one and the feelings are quite similar to Mugello, which is positive," he said.

"This is a demanding track physically, it's small but technical and the bike moves a lot."

Yamaha's Ben Spies was fourth, while Crutchlow's Tech 3 Yamaha team-mate Andrea Dovizioso was just ahead of the British rider by 0.237 seconds.

Ducati's Valentino Rossi was ninth despite crashing near the end of the session, which was ended prematurely because the safety air fence was damaged by his bike.

San Carlo Honda Gresini's Alvaro Bautista, who crashed at the same turn as Rossi shortly beforehand, came in 10th and like the Italian was unhurt.

Second practice times and standings for US Grand Prix