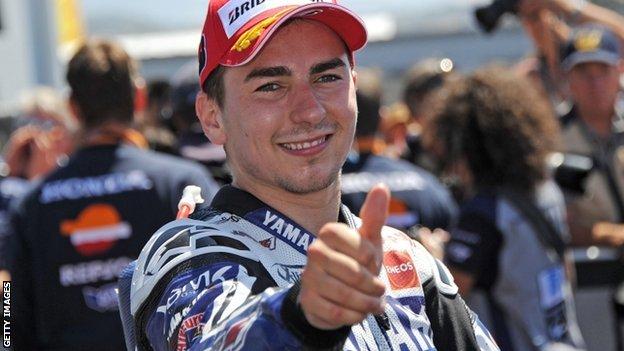 Jorge Lorenzo believes there will still be a fierce rivalry between himself and Valentino Rossi when they race as Yamaha team-mates again in MotoGP.

They endured a fractious relationship when Lorenzo joined Yamaha in 2008, with seven-time MotoGP champion Rossi eventually leaving for Ducati in 2010.

But Rossi has agreed a new Yamaha deal after a disastrous spell with Ducati.

"We are both winning riders and neither wants to lose," Lorenzo, the 2010 champion, told BBC Sport's Azi Farni.

"I think our relationship has got better, though maybe it's got better because we were in different teams."

Lorenzo thinks both men have matured and is looking forward to challenging the 33-year-old Italian on equal machinery again.

"It's good news for Yamaha because we achieved a lot of good results together," Lorenzo said.

"For Yamaha, it will be a good thing, that's the most important thing."

Rossi has finished just twice on the podium for Ducati and also went the 2011 campaign without winning a single race, the first time that has happened in his GP career.

However, Lorenzo predicts a strong challenge from the Italian in 2013.

"Someone who has talent normally keeps it and doesn't lose it like this in two years," he said. "He is still young enough. He is 33, he has won a lot of races. With the Yamaha a better bike this year, it will be easier for him.

"It's true that us younger riders are getting stronger, more experienced and more consistent, but we have to remember that Valentino has won a lot of races. We have to respect that and keep it in mind."