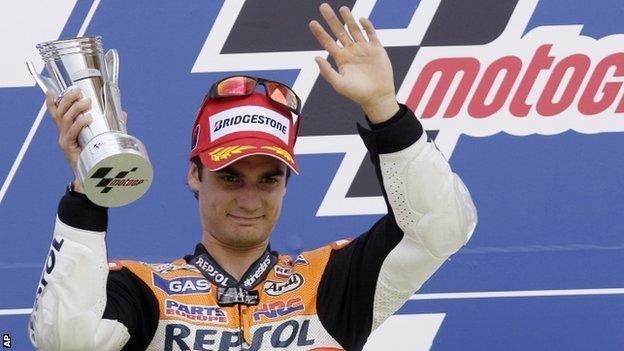 Stoner led the field in the opening session before Spaniard Pedrosa set the fastest time of the day, recording a one minute 39.783 seconds-lap.

Tech 3 Yamaha's Andrea Dovizioso was fourth, while British rider Cal Crutchlow recovered from a crash in the morning session, that saw him take to his second bike, to post the sixth-best time, 1.272 secs behind Pedrosa.

Pramac Ducati rider Hector Barbera was taken to hospital with fractured vertebrae following a crash and is ruled out for Sunday's race. He will be replaced by Toni Elias.

Spaniard Barbera had only just returned to the track after breaking both bones in his lower left leg in July.