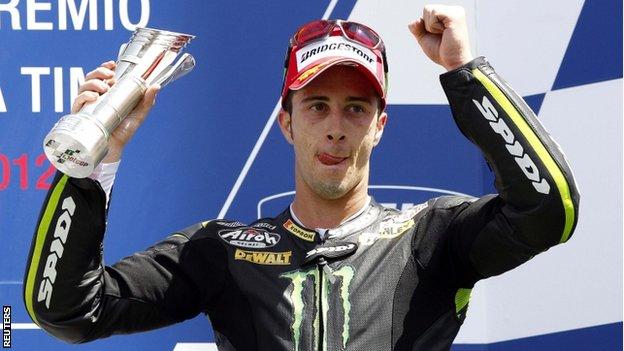 Ducati's factory MotoGP team have confirmed the signing of Andrea Dovizioso on a two-year contract.

The Italian, 26, is currently the team-mate of Cal Crutchlow at Tech 3 Yamaha and will replace Valentino Rossi at Ducati in 2013.

Filippo Preziosi, general manager of the Ducati team, said: "I'm pleased that he has chosen to join our team.

"Andrea is aware of the work to be done and approaches it with enthusiasm and confidence."

Dovizioso is currently in fourth place in the MotoGP championship standings, and will join Nicky Hayden on the team after Rossi's decision to return to Yamaha.

Hayden will after being knocked out in a qualifying crash at Indianapolis.

Crutchlow had been heavily linked with taking a ride at Ducati and could now be forced to re-sign with Tech 3 for next season.