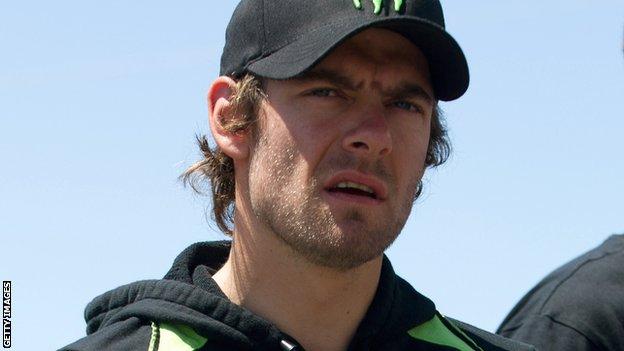 Cal Crutchlow has confirmed he will stay with his Tech 3 team for next season in an all-British line-up with Bradley Smith.

The 26-year-old had looked certain to leave Herve Poncharal's squad, having been pursued by Ducati's factory team earlier in the season.

However, Ducati have instead signed up Andrea Dovizioso.

"I am delighted to commit my future to the Yamaha Tech 3 Team for at least one more year," said Crutchlow.

"This is a sensible move from Cal, even though he was disappointed to miss out on the Ducati and there were potentially more lucrative deals on offer in lesser championships. This package clearly has MotoGP podium potential and it is the next logical step in his progression as a rider."

"Together we have made huge progress this season and achieved some strong results and I am confident we can be even more competitive in 2013."

Crutchlow has finished inside the top six in eight races this season and is currently fifth in the world championship.

He failed to score points for the first time this season at the Indianapolis GP last weekend, after crashing out.

Crutchlow's team-mate for next season, Smith, moves up from the Tech 3 team in Moto2.

"I have dreamed about being a MotoGP rider for as long as I can remember and to get this chance with such a professional and successful team is fantastic," said Smith.

"It is clear from the results achieved by Cal and Andrea Dovizioso in 2012 that Tech 3 is a very competitive package and I can't wait to begin this new adventure in my career."