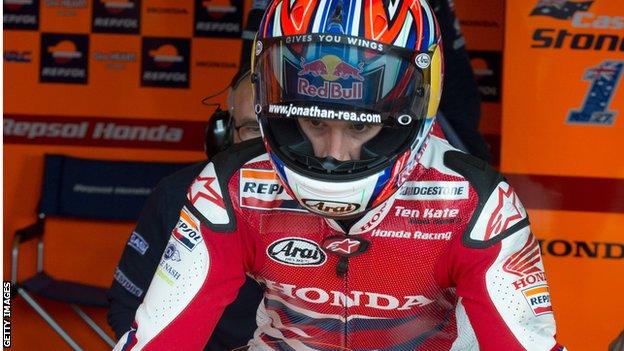 Northern Ireland rider Jonathan Rea finished in a fine seventh place in the MotoGP round at Aragon in Spain.

The Isle of Man-based racer is deputising for injured world champion Casey Stoner, who hopes to be back in action for the next round at Motegi.

Riding a Repsol Honda, Rea qualified in seventh position and ended up coming home one place ahead of legendary Italian Valentino Rossi in the race.

Rea narrowly avoided a collison with Ducati-mounted Rossi during the race.

"It was a difficult race for me as I was on my own quite a bit, but I'm quite satisfied and I've learned a lot," said Rea after the race.

"I've really enjoyed the experience and it will help make me a better rider - hopefully I'll be back in the MotoGP paddock some day.

"Now I'm looking forward to the final round of the World Superbikes at Magny-Cours next weekend."

The Ballyclare rider, who lies fourth in the World Superbike championship standings, was eighth in his first MotoGP race at Misano two weeks ago.

Australian Stoner had surgery on a broken ankle after breaking an ankle in a crash at Indianapolis in August.