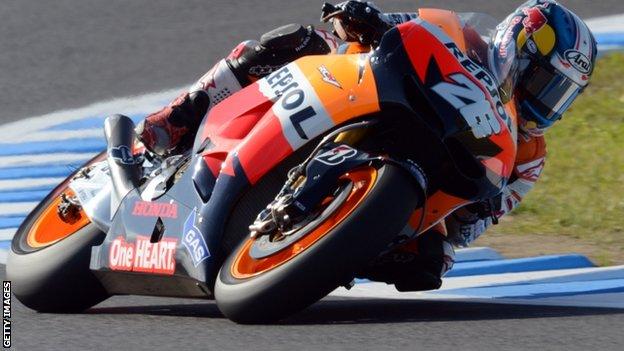 Spain's Dani Pedrosa got his weekend off to the perfect start by recording the fastest time in practice ahead of the Japanese MotoGP.

Repsol Honda rider Pedrosa is 33 points behind Yamaha's Jorge Lorenzo in the championship standings with four races of the season remaining.

The 27-year-old ended was 0.102 seconds quicker than compatriot Lorenzo, with Italy's Andrea Dovizioso in third.

The Australian has missed the last three races after and ended the day 0.895 seconds behind team-mate Pedrosa.

Crutchlow said: "Today wasn't the start I was hoping for at all because we worked very hard to improve the bike but I was unable to find a comfortable setting.

"I am way down on the timesheets and a long way behind Andrea and we are both on the same bike and the same tyres, so it is clear that we have a lot of work to do to improve tomorrow.

"Nothing we tried seemed to work."