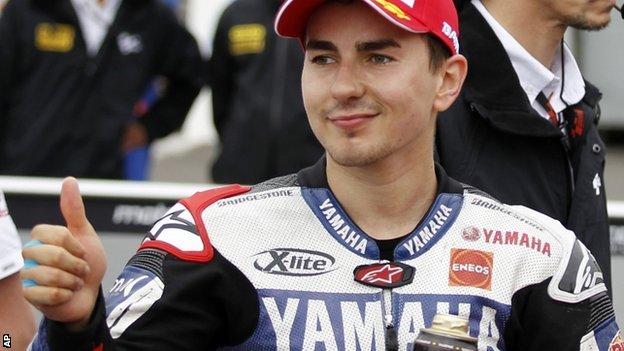 Championship leader Jorge Lorenzo does not expect to win the MotoGP title in Malaysia this weekend.

Lorenzo, 25, holds a 28-point lead over Dani Pedrosa with three races left and will lift his second title if he wins on Sunday and Pedrosa can only finish 13th.

The Yamaha rider said: "Yes it is a possibility to win the title on Sunday, but it is difficult for this to happen.

"I'm not thinking too much about this but will try to reach my maximum."

Lorenzo won the title in 2010 and looks likely to take his second winners' medal before the season ends in Valencia on 11 November.

But with 25 points available for a race win, one non-finish could put Repsol Honda rider Pedrosa back in contention.

to make it four wins out of five, and Lorenzo is taking nothing for granted.

"Here [Sepang] maybe something could change - different track, different conditions and different circumstances," he said. "We will wait for practice on Friday.

"Now that I have already won a title, at least I can be happy with winning it once, even if the goal is to get more titles.

"Not so many riders have a title so now I can take things a bit more calmly."

Lorenzo was speaking after riders, team officials and media gathered at Turn 11 of the Sepang circuit to pay tribute to Italian rider Marco Simoncelli, who died in a crash there last year.

Team owner Fausto Gresini unveiled a plaque in his honour and the gathered crowd observed a two-minute silence.

He said: "It was like always - very strange. Everyone in the paddock came to Turn 11 where Marco crashed last year so it was very deep and emotional. We miss him a lot."

Also this weekend, Marc Marquez has the chance to wrap up the Moto2 title in Malaysia, while Sandro Cortese can also win the inaugural Moto3 title.