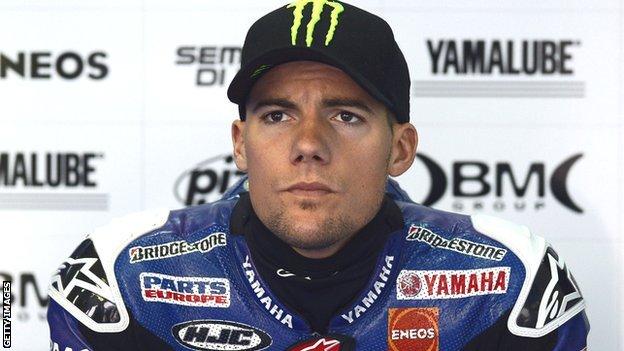 Ben Spies will miss the rest of the MotoGP season after he had surgery on ligament damage to his right shoulder.

I'm lost for words. We've had such a tough season with an unbelievable amount of bad luck

The factory Yamaha rider suffered a shoulder separation, a cracked rib and bruising to the lung after falling in the wet race in Malaysia.

The 28-year-old had surgery in America and will have his arm in a sling for up to 12 weeks.

Yamaha said that they will not replace Spies for Sunday's race in Australia "due to time constraints".

Japanese Yamaha test rider Katsuyuki Nakasuga will replace Spies for the final race of the season in Valencia on 11 November.

Spies, who is joining Pramac Ducati next season, said earlier this week: "I'm lost for words. We've had such a tough season with an unbelievable amount of bad luck.

"We have always gone out there to give it 100% and it was the intention of both myself and my team to continue to do so at Phillip Island."

Texan Spies is 10th in the championship with 88 points. His team-mate, Spaniard Jorge Lorenzo, leads the standings with 330.