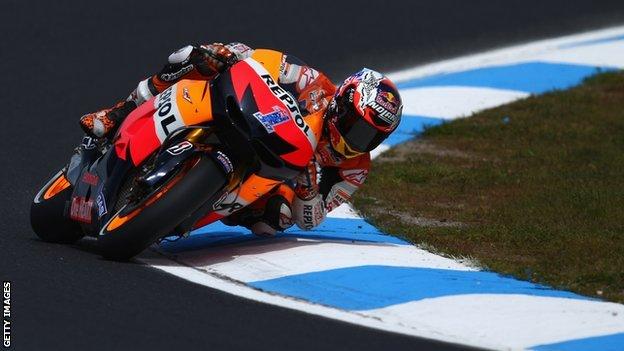 Casey Stoner led the way in practice at his home grand prix as the Australian set the fastest time in Friday's second practice at Phillip Island.

Lorenzo can win the title this weekend if he wins the Australian GP.

Stoner, who is is showing the right form to win at Phillip Island for the sixth straight year.

Pedrosa improved steadily throughout Friday's practice sessions. The Spanish rider needs to beat his compatriot Lorenzo on Sunday to extend the title race to the final race in Valencia next month.

Tech 3 Yamaha rider Crutchlow's fourth place, 1.368 seconds behind Stoner, was impressive considering the Briton has been struggling with flu-type symptoms in the build-up.

The Briton finished just ahead of team-mate Andrea Dovizioso, who will be looking to improve if he is to overtake third-placed Stoner in the championship standings.