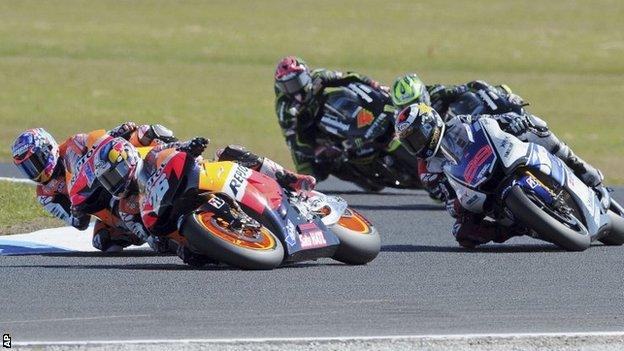 After seven months, 17 races, thousands of air miles and 2,375 points, the MotoGP season comes to an end in Valencia this weekend.

While the main prize has already been decided, with last time out in Australia, we are in for a treat in Spain.

Home rider Lorenzo is and he will be one of three main contenders - along with Dani Pedrosa and Casey Stoner - when the gloves come off in Valencia.

All will want to finish on a high note.

Lorenzo wants to prove he is a worthy champion; Pedrosa has lost the championship but will want to prove that he is the fastest man out there; and Stoner will be taking part in his

He's about to walk away from MotoGP and what better way than with a win?

Jorge and Dani are both obviously back in Spain in front of their home fans and they have all got nothing to lose. But who wants it most?

Cal Crutchlow, who has scored more points in a season than any British rider for years, probably needs one of the top three to have a problem if he is to make the podium.

He has had a very solid season and is a real contender for top-three finishes in the future.

He has mixed it with the top guys all year and he has been brilliant. Already, we can't wait to see how he does next year. We haven't had a British winner since before Cal was born 27 years ago but those days may be coming to an end.

The other rider who has really stood out for me this season is Stefan Bradl. He has done extremely well in his debut year after winning the Moto2 championship in 2011 and has equipped himself well. He has done so much better than we expected and is another one to watch in the new year.

Valencia is a real twisty track, and it's physically hard work for the riders on a MotoGP bike. The circuit winds itself backwards and forwards but the good news is that it is on a small footprint so as a spectator you can see most of the track from wherever you sit.

Some of those fans may be staying on, like me, as the riders have a post-season test early next week.

We will get to see Valentino Rossi after two disastrous years with Ducati. The Italian recently, and his sport needs him back to his best.

I wonder how fast he will be from the start? We'll all find out next week...