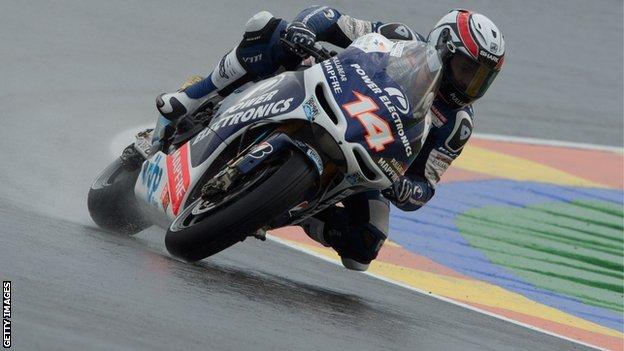 Randy de Puniet was a surprise name at the top of the timesheets as wet weather affected practice for Sunday's Valencian MotoGP.

Many of the top riders stayed in their garages, leaving CRT rider De Puniet as the quickest man on the damp track.

Michele Pirro was second, ahead of Ducati rider Nicky Hayden who topped the morning session.

New champion Jorge Lorenzo, Dani Pedrosa and Casey Stoner all decided not to post a time.

De Puniet's best finish in a race this season is eighth place.

Hayden was fastest during the wet morning practice, clocking a best lap of one minute 44.485.

Lorenzo was second ahead of Pedrosa, with British rider Cal Crutchlow in eighth place and Stoner 10th as he prepares for the final race of his MotoGP career before retirement.

De Puniet was later able to post the best lap of the day but his 1:36.965 was still more than five seconds slower than Stoner's pole position lap from last year.