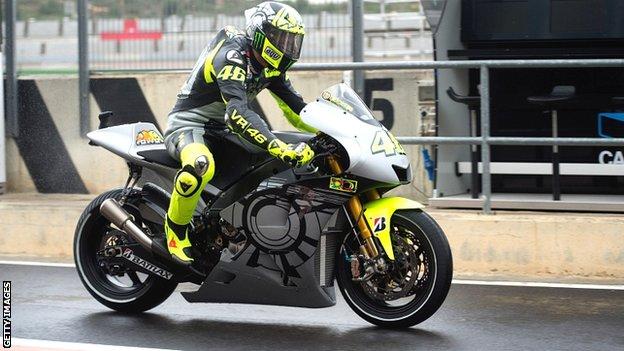 MotoGP riders had a first sample of the bikes they will use in 2013 but rain kept Rossi to 28 laps on the bike that helped him to four of his seven titles.

Rossi is back with Yamaha after two seasons at Ducati, while Smith was denied his debut ride by the weather.

"This has been the biggest let down of my career but there is absolutely nothing I can do about it," said Smith.

Smith will partner fellow Briton Cal Crutchlow at Tech 3 Yamaha next season, which will be his first in MotoGP.

New champion Jorge Lorenzo did not set any lap times, while he and new team-mate Rossi have decided to quit the second planned day of testing on Wednesday and hold their own test at the Aragon circuit.

Another rookie who had to stay in the garage was newly-crowned Moto2 champion Marc Marquez.

The 19-year-old is replacing the retired Casey Stoner at Repsol Honda in 2013 but, like Smith, Marquez was not allowed out on the new bike in wet conditions.

He said: "I have this fantastic bike here but unfortunately the weather isn't very good. It's better to be patient and wait as it's important to test the bike in the best conditions possible.

"I'm really excited to get started but we we agree that it's best to test the bike in the dry for the first time, I just hope the weather will improve tomorrow."

Alvaro Bautista set the fastest lap on his Honda, ahead of Stefan Bradl and Andrea Dovizioso on his debut ride for Ducati.

Rossi was down in sixth place, over seven seconds off the pace.