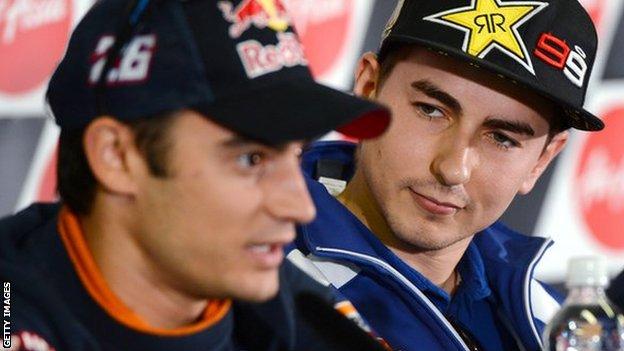 The 2012 season might not go into the books as a classic chapter but certainly it was as an important one, with the retirement of Casey Stoner, the redemption of Dani Pedrosa and the re-crowning of Jorge Lorenzo.

Hopefully for the future of British racing we will also one day look back on it as another step forward in the consolidation of Cal Crutchlow as a genuine title contender.

It was probably as much the furore surrounding Stoner's retirement as a lack of headline-making form in the second half of the season that meant Lorenzo wrapped up the championship at Phillip Island without the fanfare of his first title back in 2010.

The celebrations that met Pedrosa's crash and Lorenzo's second place in Australia were perhaps born more of relief than jubilation, the former having cranked up the pressure on his fellow Spaniard in the second half of what would eventually prove his best ever season.

In riding conservatively in the second half of the season, Lorenzo opened the door to his great rival and it seemed cracks were beginning to appear in his psychological armour in the face of Pedrosa's relentless winning form.

On what would prove to be the final lap of the red-flagged race in Malaysia there was a telltale sign of a rider losing his nerve, Lorenzo signalling for the race to be stopped and then almost falling off as confidence in his ability gave way to panic in the treacherous conditions.

It was a moment that could have easily seen the balance of power tip irreversibly in Pedrosa's favour, with momentum already on his side thanks to victories in five of the previous six races.

Lorenzo took the other win in that six-race spell - at Misano, where Pedrosa was wiped out by Hector Barbera - and in the six races prior to that Lorenzo had managed only one more win, at Mugello.

There was a similarly worrying dip in his win ratio during his previous championship-winning season of 2010, which he also opened with wins in four of the opening six races before going on the defensive.

While his compatriot hit form in the second half of that year, Lorenzo managed just one win in the six races leading up to Motegi, where Pedrosa crashed and broke his collarbone, effectively ruling himself out of the chase for a title Lorenzo wrapped up the following weekend in Malaysia.

Of course, as with all champions, it is Lorenzo's consistency that set him apart, in both winning seasons. But he must hope to win more than six races in 2013, especially if Pedrosa carries his current form through to the start of the new campaign.

Pedrosa told the BBC at Phillip Island that a cautious start to the year, which saw him without a win until round eight, was a deliberate tactic to avoid the kind of injury that has seen past championships ruined.

The confidence he found subsequently was enough for him to be sanguine about the mistake that cost him his chance of the title later that weekend and has no doubt empowered him in his preparations for the next campaign.

One criticism of MotoGP in 2012 has been that the racing has not been close enough - something that is rightly being addressed by Carmelo Ezpeleta, head of organising body Dorna. The introduction of CRT bikes this season is to be followed by standard electronics for all bikes next year.

That will pave the way, it is hoped, for radical regulation changes and a much more level playing field in 2014.

The 'gapping' of riders at the front, however, is more symptomatic of the incredibly high standard of riding that has been set by Lorenzo, Pedrosa and Stoner - not forgetting Valentino Rossi - over the past five or six years.

No matter how closely matched their current machinery is, there are days when even the top guys in the championship cannot live with each other, such is the perfection of their performance at particular tracks and in particular circumstances.

While Rossi has floundered mid-pack for the past two seasons on the Ducati the level at the front has moved on again and the challenge for him next year, when he will be back at Yamaha, is momentous.

That's not to take anything away from a seven-time world champion, who set new standards for the rest to be measured by during a truly dominant era in the noughties. The question now is not whether Rossi has still got what he had, but whether he can be even better.

He will need to be.

It is a long-established process of evolution in sport - newcomers to any discipline eventually match and then surpass the technical abilities or athletic achievements of the men and women they once idolised.

This is what has happened with Stoner, Pedrosa and Lorenzo and before long it will be they who are looking over their shoulders as the super-talented Marc Marquez, who has replaced Stoner at Repsol Honda and who has the potential to be on the podium from race one in 2013, gets their measure.

Pedrosa and Lorenzo's reaction not only to this fresh challenge but more importantly to the pressure they will exert on each other from the opening round could ensure the 2013 MotoGP World Championship is not the two-horse race people are predicting.

Any mistakes will be gleefully capitalised on, not only by Marquez but by Rossi, Crutchlow, Stefan Bradl, Alvaro Bautista and possibly Andrea Dovizioso if he can prove the man to finally tame the Ducati.

It is an intriguing prospect and as the sport endures another transitional year it may well be that Ezpeleta, and the fans, get the close racing they are so desperate for ahead of schedule.