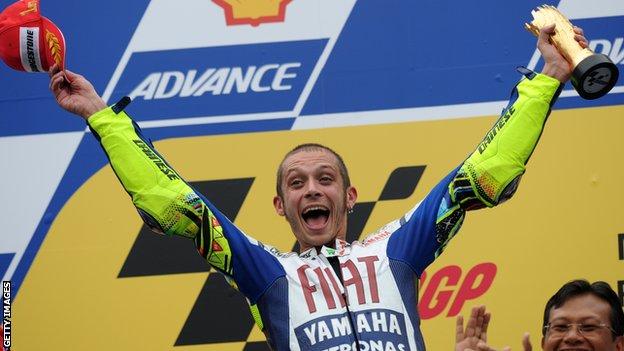 Valentino Rossi has been tipped to return to winning ways in 2013 by the head of MotoGP's organising body.

Rossi, 33, for this season after a two-year spell with Ducati.

The seven-time MotoGP champion has won 79 races in the top class, but none since the Malaysian Grand Prix of 2010.

Carmelo Ezpeleta, head of rights holders Dorna, told BBC Sport: "He thinks he can still win and I am completely sure that he can."

Rossi will partner defending champion Jorge Lorenzo in the Yamaha team this season, and is hoping to challenge for the title again after two fallow years with Ducati.

Rossi - who won four titles with Yamaha between 2004 and 2009 - managed just three podium finishes in 35 races for the Italian manufacturer but Ezpeleta believes he still has the talent to compete at the very top.

Ezpeleta said: "I'm completely sure he can challenge, with all the talent he has and all the experience he has.

"When he took the decision to go back to Yamaha it was because he wants to come back to the front. He was winning with Yamaha before and he can be at the front again.

"Of course it is good for the sport if he can do it. Valentino is a big name, he is a hero to many and one of the greatest riders in MotoGP history. If he is coming to the podium and winning races it will be very important for the championship."

Tech 3 Yamaha rider Crutchlow and Ezpeleta hopes to see him compete at the front again in 2013.

"Cal has been one of the biggest talents we have seen in the last few years," Ezpeleta said.

"We have been surprised by his performances in many races. He has not had good luck but in principle he is one of the most important assets of the championship.

"Britain is one of the most important countries in motorcycling, with a terrific history, and in motorsport in general. To have a big hero as a rider is very important."

The MotoGP season begins with testing in Sepang at the start of February, with the first race in Qatar on 7 April.