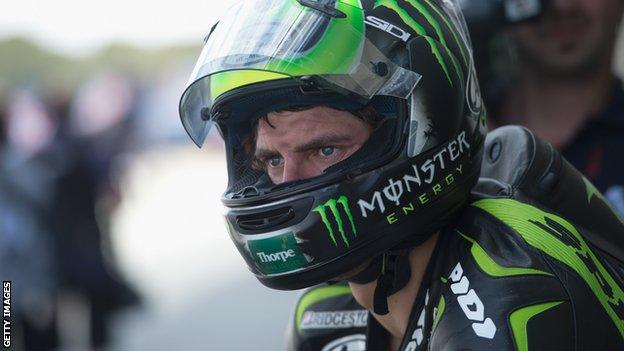 Cal Crutchlow says he expects the 2013 MotoGP season to be tough but believes he can again challenge at the front.

Crutchlow, 27, and is again racing for the Tech 3 Yamaha team this year.

He told BBC Sport: "I really don't know what equipment our team will get this year. The championship is definitely going to be tougher.

"But hopefully I can be consistent and get a few podiums. That's the plan."

Crutchlow managed a third-placed finish at the Czech Grand Prix in Brno last August and followed it up with another third at Phillip Island in Australia in November as he ended the season in seventh place overall.

He will be partnered at Tech 3 by fellow Briton Bradley Smith in 2013 and is ready to fight it out in a strong field.

"We've got some great guys out there this season," Crutchlow said.

"The top two will be Jorge and Dani Pedrosa again, without a shadow of a doubt. They will be there week in and week out.

"I expect Marquez and Stefan Bradl to be there, and Rossi will be among the top three a lot. There is a list of people who could be on the podium every race so I expect the competition to be tough.

"I hope to be challenging the top guys when I can. Hopefully we can do the all-British team justice.

"But I've proven my speed and if I can improve again like last season and make that jump again, I can be even nearer to the front. I look forward to the challenge."

The MotoGP season begins with testing in Sepang, Malaysia at the start of February, with the first race in Qatar on 7 April.